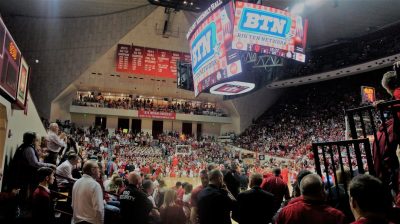 Regardless of the one-and-done rule, Indiana’s Simon Skjodt Assembly Hall will look like this on game nights.

College basketball is going to be fine, regardless of some excellent players opting to bounce straight to professional basketball.

No one has ever graduated from Fort Wayne Mad Ants University or Agua Caliente Clippers of Ontario College, and so few people outside Fort Wayne and Ontario have ever heard of these G League franchises.

Every year, Big 10 schools graduate roughly 100,000 students who remain tethered to their schools via many links, men’s basketball and football programs being the easiest to access.  Most remain engaged for the rest of their lives.  That’s a substantial fan generator to which the G League has no access.

Coaches often say, “It’s about the name on the front of the jersey, not the name on the back!”  That’s especially true for college sports fans.  They love the school, and all marketing is school based.  I went to Indiana, so I buy IU hoodies, hats, and tickets.  That’s the way this works.  On Saturdays and Sundays, I watch a lot of pro and college basketball, but I never miss an IU game.

If Zion Williamson had slipped college in favor of a lucrative pro deal, do you know how many Duke fans would have been lost?  Not surprisingly, the answer is zero.  When Zion decided to leave after one year at Duke, guess how many Duke fans decided to abandon the Blue Devils.  Yep, zero.

College hoops is about geography, alums, and students.  The NBA is star driven.

Speaking of geography – the NBA’s Central Division has franchises in Detroit, Milwaukee, Chicago, Cleveland, and Indianapolis.  Those five cities have another thing in common – none is the home of a Power Five basketball program.  Well, Northwestern is in Evanston and that’s very close to Chicago, but c’mon, it’s Northwestern!

People in Bloomington, West Lafayette, Champaign, Madison, Columbus, Iowa City, Louisville, Lexington, Cincinnati, Knoxville, and Nashville have no NBA team.  College hoops and football have a near monopoly on the attention of sports fans in those cities and towns.

People who whine about college basketball dying on the vine because of the potential loss of players forget that until 2005, high school players were eligible for the NBA Draft without ever attending college for one minute.

College basketball thrived without that last group of nine who bounced from the preps in that year’s draft.  Martell Webster, C.J. Miles, Monta Ellis, Gerald Green, Andrew Bynum, Ricky Sanchez, Lou Williams, Andray Blatche, and Amir Johnson might have thrilled us for the 2005-2006 college season had they chosen to pledge a school, but only if they played for our team.

Players leaping past the college experience into the G League might actually make college basketball more enjoyable for fans because those players who are ready for the pro’s for tantalize fans with their skills for a single year before moving to the millions that await in the NBA.

Romeo Langford and several other one-and-dones from 2019 did exactly what freshman are supposed to do; they struggled.  Indiana did not move measurably toward excellence because of Langford’s contributions, but Indiana fans all over the world still poured into Assembly Hall and watched the Hoosiers on TV.  And then he left for the NBA because cash was what he was about in the first place.  And Hoosiers still came.

If college basketball at the Power Five Conference level shifts its focus from professional basketball prep to an activity enjoyed by bonafide student-athletes, fans will have the chance to become enamored of players for a longer period of time, and the quality of play will improve because as coaches other than Mike Krzyzewski and John Calipari will tell you, they want to “get old and stay old.”

College basketball and the NBA have co-existed quite nicely and will continue to, regardless of when players become eligible to earn a paycheck for their efforts.  Reports of the dimming of college basketball’s popularity were, are and will be greatly exaggerated.