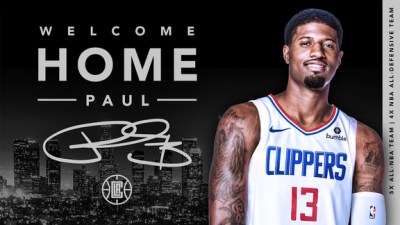 For Paul George, home is where he tells his tales.

Former Indiana Pacers forward Paul George was always unselfish with his time and words.  Sadly, they had no meaning.

To my endless discredit, it took me five conversations to figure that out.  As it turns out, somehow I’m way ahead of the game because people are still asking him questions, and inexplicably also listening to the answers.

George’s shaky grasp on reality continues to be evident every time he talks about his time with the Pacers.  In a podcast, hosted by Quentin Richardson and Darius Miles, George said, “I ain’t gonna say the names because I’m going to keep their business private, I’m a just say it like this, I had at the time, the best power forward saying he wanted to come to Indy and team up with me.”

No one outside Indiana holds George accountable for his silly blather, so the hosts smiled and nodded.  George continued with more nonsense, “They’re like, ‘we’re a mid-major, we’re a small market, like, we can’t do it, we’re a small market, we can’t afford that.’  I’m like, ‘the best power forward wants to come play here, like, y’all can’t make that work?’ They didn’t want to do it.”

And so according to George, he called his agent and said, “Man, they don’t get it. Get me up outta here.  They don’t want to win.”

As we know, the Pacers traded George to the Oklahoma City Thunder for future all-stars Victor Oladipo and Domas Sabonis.  The Pacers continue to make progress toward what they hope is a championship, and George was dealt at his request in 2019 to the Clippers, but not before telling OKC fans (in 2018), “If ya’ll didn’t quite get it, let me say it again: I’m here to stay.”

George has failed to win a playoff series since 2014, and so have the Pacers.  The good news for the Pacers is that they have won at a higher percentage during each of the last three seasons than they did during each of George’s last three years in Indy.

If you have some spare time and want to fill them by listening to a tall man spout gibberish, here are some of George’s greatest hits.

This is Paul George telling Thunder fans that he is in OKC to stay:

Here’s George after signing an extension talking about never feeling more at home than he does in Indianapolis:

From Indy ➡️ OKC. Why did @Yg_Trece leave the @Pacers?

In partnership with @ATT 5G. pic.twitter.com/CLihV3W1wP

It’s like George decided one day he wanted to join a club, so he created a brand and found out later there actually is no club – just a bunch of fictitious brands roaming social media.