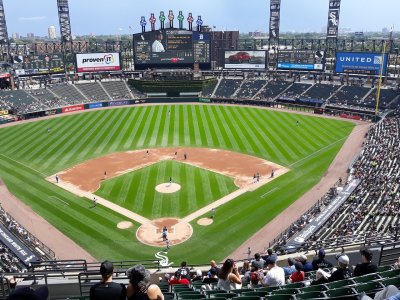 One great argument against fake crowd noise during baseball telecasts is there have been small crowds and only occasional ripples of noise at the home of the Chicago White Sox since 2005.

Laugh tracks have been stripped from virtually every sitcom on TV.  Back in the day TV programmers added laughter to shows because they felt without it, people would not be smart enough to tell what was funny.  Then they grew up and gave audiences a little respect.

Major League Baseball and the National Football League – along with the networks that carry their products – are in meetings this morning discussing whether to add crowd noise to broadcasts of games played this summer and fall in mostly empty stadiums because of virus spread concerns.  Maybe the NBA is doing the same, but I tend to give more credit to Adam Silver as a commissioner than either too-smart-for-the-room Rob Manfred or Roger Goodell.

The PGA has continued without fans, which means there are no annoying rubes yelling “You da man!” every time a player hits a drive.  I will be eternally grateful that golf and CBS have decided to allow the silence of the fan-free course to exist without artificial cheers.  Same thing with NASCAR and IndyCar.

You see, we are not idiots.  The crowd, if anything, is an annoyance during games.  They stand, yell, and heckle with impunity as though their behavior has any effect whatsoever on the game. It doesn’t affect players – or the TV audience.  No one watching a game ever said, “I watch for the noise.”

I’ve asked a lot of former professional athletes about how fans affect them.  I’ve spoken to only one who said they seriously rattled or motivated him.  He was a first baseman who was forced to play the outfield when he came up to the majors.  People in the bleachers at Wrigley Field were merciless, so the guy went 5-for-11 with 3 home runs and committed no errors that series.

I watch the Korean Baseball Organization game ESPN broadcasts each morning.  The stuffed animals planted in the seats behind home plate make no sound, and the Koreans and ESPN don’t pump fake noise in.  I find the broadcasts enjoyable despite not knowing any of the players – other than thoroughly despicable former Cubs shortstop/second baseman Addison Russell.

When major league sports restart, fans are going to watch.  That’s what we do.  And for those who need an adjustment period for the lack of audio ambience, it will take about 10 minutes to get used to it.

There is no reason to micromanage the experience of watching by manually inserting silly noises to more closely replicate what games used to sound like.  Life is not the same right now, and falsely presenting sports as though it is denigrates fans who know otherwise.

We need sane leaders in government and business to lead us through these strange days by giving us the truth – unaltered, unfiltered, and unrepentant.  What we do not need is strange to be sold to us as normal.

MLB, NFL, and NBA need to treat adults like adults and forego contrivances, just as TV producers and networks finally did as they correctly assumed we are capable of laughing when something is funny, rather than when we are cued.

2 thoughts on “Please, MLB, NFL, and NBA – do not pump fake fan noise into game broadcasts this summer and fall”