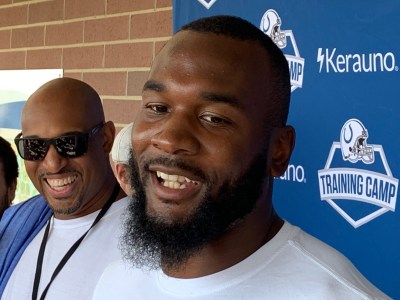 Colts LB Darius Leonard is always friendly and honest in dealing with the media. That raw honesty was apparent in his IG video.

Indianapolis Colts linebacker Darius Leonard is one of my favorite people in the locker room.

Several times each week during the season the media is invited to talk to players at their lockers, and Leonard’s locker is usually crowded because he is insightful, honest, and popular with fans.  He’s also very patient, consenting to interview after interview if people like me request a one-on-one.

On the field, Leonard is a rampaging beast, but in the locker room he’s actually a sweet guy who speaks with thoughtful transparency.  Some professional athletes are slick, moody, and reluctant.  Not Leonard.

When I saw that Leonard posted video on Instagram yesterday, I looked forward to watching it.  And then I was heartbroken when I did.  In the video, Leonard expressed anger and anguish over his treatment while eating with his family at a South Carolina Chiptotle restaurant.

In it, Leonard claims the manager kicked his group out of the restaurant after a white customer complained he was treated poorly by Leonard and his party, “(The manager) came up with a terrible attitude, asking us did we have a problem.  So, we’re all lost, trying to figure out what’s going on. He said that a white guy said we were verbally abusing him; talking trash to him. It was basically a lie…they wanted to call the police on us. That’s what being black in America is right now.”

Leonard continued, “We know that if that manager would have called the cops right then and there, we know what would have went down.  And it’s wrong. And y’all wonder why all the protests and all that is going on right now. We are tired of this… And y’all white people don’t understand what we go through. This is very frustrating…and y’all don’t feel our damn pain. If y’all sit in our shoes for one day and just walk outside and really feel what we go through, then y’all would understand. Some of you need to understand that we’re not just saying black lives are the only thing that matters. What we’re saying is we want to be treated equally. Just go sit down in public and eat without being bothered. That’s the shit that I’m talking about.

This was unscripted and raw – totally Leonard.  It is a scathing rebuke of the inequities in our society and a plea for movement toward fairness and decency in a country that offers them generously only to a very specific demographic.

Leonards comments were a stirring call for long overdue understanding and empathy that have been withheld by whites in America.

Stephen Holder wrote a piece at The Athletic about the incident and video, and I was shocked and dismayed by many of the comments.  I won’t dignify them by sharing their calls for proof, assertions that Leonard is whining, or equating experiences as a white man being mocked as a kid to what Darius says he goes through each day.

Leonard did exactly the right thing – diffuse the situation by leaving before police were called, and then hold those responsible through social media, which has become the best weapon for fighting back against unchecked ignorance.

Incidents of racism require a bright light be shined on them so the behavior can be corrected.  Racism cannot be allowed to be business as usual in South Carolina, Indiana, Minnesota, or anywhere else in America.

And if you are tired of stories about racism being “all over the news,” imagine how tired you would be of racism if you were black.