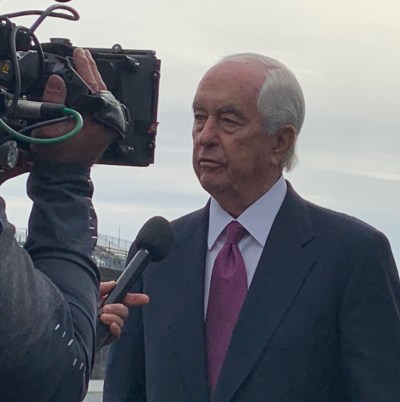 When Roger Penske was introduced as the new owner of the Indianapolis Motor Speedway and all Hulman assets, I hoped he would look at the local TV blackout and say, “This is stupid. Let’s stop doing that!”

The absurd question behind live blackouts has always been, will fans buy the cow if the milk is free?  The more germane question is, who buys a cow if they have never tasted milk?  If people would choose to watch an event at home on TV instead of live, the event is in deep trouble.  To behave as though exposing the live show to the masses would be deleterious to ticket sales defies logic and math.

There is only one place remaining in the world that clings to the notion that not televising an live sporting event locally leads to greater attendance.  Everyone else in every organized sport has adopted the philosophy that the more people see an event on TV, the more they will want to pay to see it in person.

And if the Indianapolis Motor Speedway doesn’t adjust its thinking quickly, the 104th Running of the Indy 500 will not be available to locals who want to watch the race but feel it is unwise to sit with approximately 150,000 others during a Coronavirus pandemic.

The Chicago Blackhawks were the last sports franchise that lifted the ban on televising home games 13 years ago.  Once the ban was lifted, attendance went up – way up.  That also coincided with a marked improvement in the quality of the team, so it’s not a perfect scenario for measuring the effect TV has a live gate, but live TV sure didn’t hurt!

The Indianapolis 500 is magnetic because there is a collective insanity in its very existence.  Men and women have always dreamed of going faster, farther, and higher regardless of the risk, and while all the barriers have likely been broken, there is still a compulsion within many to dare fate and put their feet to the floor.

There is an entire generation of kids in Indianapolis who have never seen the race, even on TV.  Maybe back in the day, kids would wait for the 7p start time to watch the replay RTV6 (now on WTHR-13), but not anymore.  They have better things to do than watch a three-and-a-half hour race that concluded at least two-hours prior.

The idea that an event can become more popular by limiting the access of people interested in watching it is borderline crazy.  The race sells more tickets than any single day sporting event on the planet, and the fear is that live TV would remove an important motivation for attendance.

The IMS is enormous.  There are more than four people at the race for every fan who packs into Lucas Oil Stadium for a sold-out Colts game.  And 16 Conseco Fieldhouses would be needed to hold all the race fans willing to plunk down a bunch of money to see the Indy 500.  The Pacers are challenged to fill one for NBA basketball.

Do you know why?  Because it’s the coolest f***ing thing you and I will ever see!

It’s time for new ownership to stop living in the Human-George Family’s fear of losing, and begin to embrace the fact that 300,000 people come to a hallowed piece of property every year for a reason other than they haven’t yet found something better to do.  Penske needs to understand that the Indianapolis 500 should focus on becoming more popular, not invest in keeping what they have.

The folks at the Speedway need to understand what everyone other than Bill Wirtz, late owner  of the Blackhawks, learned in the 1970s – that television builds a brand better than any device in history, and nowhere does the IndyCar brand need to be stronger than in Indianapolis.

The only winners in the live blackout game have always been the radio stations who carried the events live.  WIBC has long been the winner in this illogical blackout, especially since the exclusive radio rights were won by Emmis Communications almost a decade ago.  The radio broadcast on Emmis stations achieves nearly a 12-rating – not share, but rating.  (Share is the percentage of people listening to a station among all of those listening to the radio, and rating is the raw percentage of those in a community who are listening to a station.)  No large market radio station to my knowledge has achieved a 12-share for any broadcast in the last 30 years.

I love the radio broadcast and hope it lives forever, but it should not be the only way Indy 500 fans in central Indiana can experience the race if they don’t have a ticket.

That 300K attendance is a monolithic testimony to the power of the Indianapolis 500, but it would be dwarfed by the number of people who would witness the Indy 500 live on TV and develop an affinity for the event if it were televised live.  There would be thousands of Indy 500 parties across central Indiana in addition to the huge party in Speedway, Indiana.

Indianapolis would embrace the Indy 500 in much the same way Louisville embraces the Kentucky Derby, which is not blacked out locally.  For two weeks, Louisville stops being a mediocre town, and develops a New Orleans type outlook and swagger.  As pleasant as all the fooferah surrounding the Indy 500 and the 500 Festival is, it isn’t Louisville, and that’s because 80% of the community is locked out of enjoying the centerpiece event.

This is a perfect year to lift the blackout in the name of fairness for those whose lives would be at risk if they choose to attend.  It could be sold as an accommodation to those with underlying conditions from the munificent Roger Penske.  What it would really be is an admission that for decades the blackout has been anachronistic buffoonery.