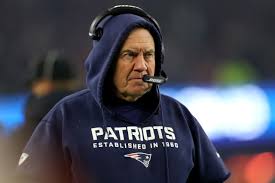 No telling how many championships Bill Belichick would have won if his Patriots had not cheated, but there is no question they have cheated many, many times.

Clearly, the New England Patriots have not learned their lesson.  Another scandal has led to another penalty that validates the risks they routinely take to gain an unfair advantage.

This time the Patriots sent a video crew to Cleveland last December 8th to record the sidelines work of the Bengals a week ahead of their game in Cincinnati.  They were caught by the Bengals media relations staff and reported it to the NFL.

As a result, the NFL stripped a third round draft pick in 2021, fined the team $1.1 million, and banned the Patriots’ television production crew from shooting any games during the 2020 season.

That has to get their attention, right?

Spygate, Deflategate, Headsetgate, IR Gate, and a variety of additional -gates have shown the Patriots relentless disinclination to play within the rules.  Draft picks has been forfeited, fines levied, and players suspended, and yet the behavior continues.

The Patriots have historically done everything they can to create an advantage, whether it is prohibited by NFL rules or not.  Occasionally, they get caught and are slapped on the wrist after offering up a denial that defies credulity.

We can assume there have been many, many times the Patriots have not been caught.  One of those are still discussed with considerable anger.  The Rams were convinced the Patriots videotaped their walkthrough prior to Super Bowl XXXVI.  The Patriots have always denied those claims, but those with the Rams back then still insist video surveillance is the only explanation for pre-snap adjustments by the Patriots to Rams plays they had never before run.

There is no question the Patriots have benefitted by cheating and will almost certainly continue to cheat.  The question is whether it is worth the time and trouble it would take for the NFL to compel them to stop – if such a thing is even possible.

The Patriots guarantee TV ratings, and it is impossible to tell the story of the first 20 years of this century without focusing on those six championships won through both nefarious and conventional means.

The question of what the Patriots would have been and what legacy coach Bill Belichick will enjoy in the annals of NFL history is impossible to answer without considering the role cheating played.  There are people who say, “If you ain’t cheating’, you ain’t trying.”  Maybe the Patriots just cheated more often and better than other teams, so a microscope has been trained on their operation.

One thing that is certain is that if the NFL wants to bring about a consequence that will compel respect and compliance, forfeiting a third round pick and demanding they stroke a $1,100,000 check will not do the job.  Been down that road enough times to know the result.