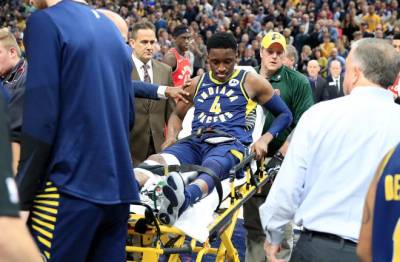 Like all athletes, the last thing Victor Oladipo wants is to re-live painful, exhausting, and endless rehab. Nothing wrong with that.

Vic will sit, and he is right to do it.

Instead of competing for the Indiana Pacers, guard Victor Oladipo will continue to focus of recovering from surgery to repair a torn right quad tendon.  That’s according to ESPN’s Adrian Wojnarowski, who spoke to Oladipo.

He’s making a decision that will benefit both his long term physical health and financial wealth.  After next season, unless Oladipo and the Pacers come to terms on an extension, he will become a free agent which will make him exceptionally wealthy.

But that wealth will come only if he’s healthy.  Without two legs capable of playing basketball at a high level, Oladipo is a good karaoke singer with a broad smile and sunny disposition.

Risking hundreds of millions to indulge in eight regular season games and likely a single playoff series would be the irresponsible act of a lunatic.  Oladipo was always either going to be close to 100% or wait for 2020-2021 to prime the pump for free agency.

Fans will whine about Oladipo’s refusal to compete with his teammates, but they have never faced a choice like this.  They look at the $105,487,440 Oladipo will have earned during his eight NBA seasons at the end of next season, and ask how much he needs?  Under normal circumstances, they would be justified because players like Oladipo are paid to compete, but these are not normal circumstances.

We are in the midst of a strange period when all of us are adjusting our perspective as to what is important.  Covid-19 is an ever-present health concern, and it will continue to be that in Orlando four weeks from tomorrow when the Pacers resume the season against the Philadelphia 76ers.  Racial tensions are causing conversations and rallies that might forever change the pitch of racism in America.  Priorities have shifted, and no one has his feet firmly underneath him just yet.

There are rumors of Oladipo being misdiagnosed.  More rumors suggest he will ask for a trade or hopes to sign elsewhere as a free agent.  Whether there is a scintilla of truth in them, we have no idea right now.  Pacers fans remember all too well Paul George stating definitively that he wanted to stay in Indianapolis, so they are a little bit skittish about star players entering the last year of a contract.

Reports say Oladipo will travel with the team to Orlando, so clearly he still feels as though he is an integral part of the fabric of the team, so that’s a good sign for those trying to read the tea leaves.  The bad news is that the Pacers will not be able to replace him on the roster, but this was a potent team without Oladipo, so that’s not much of an issue.

Oladipo is a special person and player (when healthy).  Of course, Pacers fans want Oladipo to stay put and assume the position of generational fan favorite.  He earned his stripes an hour south in Bloomington as one of the most popular players of the Tom Crean era.  He fits here.  It works here.

Impossible to justify blaming Oladipo for opting out given his circumstances, and it’s equally difficult to blame fans for their jitters regarding Oladipo’s future.

These are strange times, and they just got a little stranger for the Indiana Pacers and their fans..