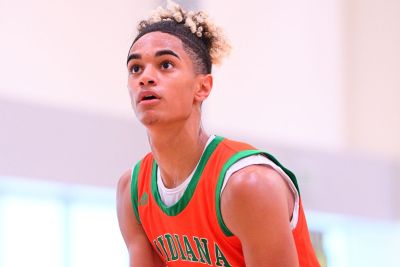 Khristian Lander left being the green and orange of Indiana Elite for Indiana University’s candy stripes.

A kid who should be headed back to Evansville Reitz High School for his senior year reports to Indiana University’s campus, will begin workouts with the basketball team, and it is news.

It’s more than a little creepy that a fanbase is so totally engaged in the comings and goings of a college hoops program that they monitor the movement of a non-adult as he arrives on campus.

Social media makes following the activities of those who are active on it easy to follow.  Lander tweeted very simply yesterday, “We here Hoosier Nation.”  That prompted 2,900 likes and 160 retweets.  Jeff Rabjohns wrote a quick story at peegs.com, which I’m sure is performing quite well in the race for clicks.

That’s not a criticism of Jeff or Peegs.com.  It’s Jeff’s job to relate minutia on that website – especially during a pandemic when nothing else of substance is going on.  As for Lander, he’s a kid in an age when social media has become a scorecard for importance, so I don’t blame him either.

I blame us.  Fans.  Kooks so immersed in Indiana Basketball that the comings and goings of a kid calls for us the click on a link to read about it.  How have our lives become so empty otherwise that we revel in a kid who was a high school junior just two months ago driving up I-69 from Evansville?

Hey, I’m not getting pious here.  I did the same thing.  Oh, Lander is in Bloomington?  That’s great!  I want to read about that.  But after finishing the story, I felt icky.

It’s especially odd because I disagree with the decision Lander and his family made to skip his senior season in order to play for IU a year earlier.  This appears to be a sprint toward NBA millions of dollars that might or might not await Lander in a year or two.  Nothing wrong with getting rich, but it’s important to enjoy life’s precious moments, and there would have been plenty of those during at Reitz for Lander’s senior year.  Hurrying into manhood can short-circuit the process, leaving important lessons unlearned.

Of course, just as it is none of my business that Lander is in Bloomington, it’s also none of my business that he is skipping his senior year to accelerate his path to a potential NBA career.  Maybe Lander’s family is destitute.  Maybe Lander is so well put together as a kid that he will evolve into a fine adult regardless of when he graduates high school.  Maybe we should stop concerning ourselves with the comings and goings of a 17-year-old from Evansville.

Lander is a kid embarking on the next step of a journey to reach his potential as a player – and hopefully he spends as much time trying to figure out how to be the best version of himself as a human being.  That’s what happens in college for people open to that transformation.  He’ll do it in a weird fish bowl that can bring glee and pain, fraternity and loneliness, and successes and failures.

The hopes of Indiana fans can weigh heavy on the shoulders of a young man, and that will be part of Lander’s journey too.  He will be cheered, adored, retweeted, derided, and mocked.