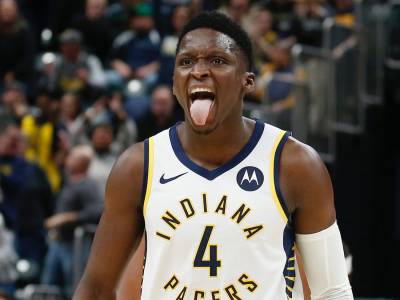 Was Vic just teasing when he threatened not to play in Orlando?

So now, according to reports, Victor Oladipo is expected to play for the Indiana Pacers in Orlando.

What are we to make of this turn of events?  Is Oladipo a flibbertigibbet who makes whimsical proclamations without thought or willingness to follow through?  Or, was he screwing around before leaving for Orlando by saying that he would not play.  Maybe he was using the old Bob Knight ploy of saying no before saying yes, so he would be a hero to fans.

Those will be good questions a couple of months from now as we ponder Oladipo’s future in Indianapolis as a prized asset in the final year of his contract, but right this minute it is a hell of a lot more fun to project Oladipo’s availability upon the immediate prospects of a team headed into a completely unique situation where almost anything can happen.

The Pacers were playing pretty well when play was suspended, winning eight of their last 11 including a home and home split with Eastern Conference favorite Milwaukee Bucks.  In the last five of those games, Oladipo showed growth averaged 18.6 points per game after averaging 10.8 over the previous eight games.

Add double-double machine Domas Sabonis, healthy Malcolm Brogdon, leading scorer T.J. Warren, and recently productive Myles Turner (averaging 16 and 10 over the final three games of the season prior to it being suspended), and the Pacers starting lineup is bordering on very competitive.

This could wind up being a seriously spunky unit once play resumes on August 1, and the Pacers will be tested during the eight game sprint to the finish – especially during the final four games.  After playing the 76ers, with whom they are tied for 5th in the East, the Pacers have four very winnable games against the Wizards, Magic, and Suns – teams that are a combined 34 games under .500.

The last four games match the Pacers against the Lakers, Heat, Rockets, and Heat again.  Those teams are a combined 85 games over .500, and none are less than 16 games over.  Yikes!

Pacers better eat early, right?  And they better stay healthy if they want to climb past the Sixers and over the Heat, who are just two games in front of the Blue and Gold.

Health is going to play a huge role in who succeeds and fails in Orlando as the NBA has tried to build a Covid-19-free bubble to ensure players finish the season without missing weeks of games because they contract the virus.  But this is a sneaky pest that cannot be trusted to behave.

Covid-19 presents another wild card to consider when trying to project winners and losers in this odd re-start, and if the Pacers can get a break or two while repelling the viral horde they could find themselves advancing a long way toward the franchise’s second trip to the NBA Finals.

That’s a lot to process without being certain Oladipo is going to play, but it’s sure a hell of a lot more fun to think about than all the political and viral crap we deal with on a minute-to-minute basis in the strangest stretch of road in most of our lifetimes.

If Oladipo plays, Indianapolis is going to feel a lot better about him as a Pacer and man, and that would be a victory before the Pacers tip against the Sixers in two-and-a-half weeks.