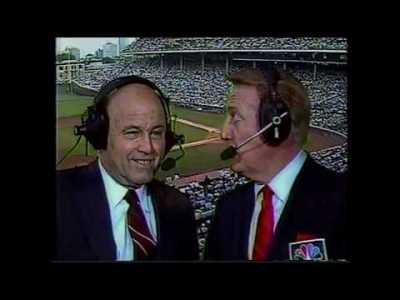 Back in 1988, Vin Scully and Joe Garagiola were on the call from Wrigley Field for the first real night game at Wrigley Field – as we heard this afternoon on the Marquee Network.

Today, I switched TV providers from YouTube TV to Hulu Live.  The first show I found on the Cubs Marquee Network – included on Hulu but not YouTube TV – was the first night game game at Wrigley Field from August 9, 1988.  I attended that game, and the first voice I heard during the replay broadcast today was my own.

Mets catcher Gary Carter was stuck on 299 career home runs, and I built a significant dislike for  Carter during his career with the Expos and Mets (when he wrapped his career with the Dodgers, Giants, and Expos again, I pitied his eroding abilities so my dislike waned).  I turned the game on this afternoon while the game was in the top of the sixth with Carter at the plate, and heard “299! 299! 299!” I had to turn the TV up, but there was my psychotic chanting – faint but audible.

I yelled “299!” incessantly from our seats in the 10th row behind the Cubs on deck circle every time Carter came to the plate.  A fan sitting in front of us asked why I hated Carter so much.  I told him, “Because he refers to himself in the third person.  He calls himself ‘The Kid’ all the time, and I don’t like self-important people.”  The guy smiled and nodded.  I think it pleased him that I had any reason at all besides the empty beer cups that were stacked in front of me.

Carter failed to hit his 300th home run that night, and I walked home believing I may have exerted some kind of a whammy on him.  That delusion was proven flawed two days later, as I sat in different box seats.  As I yelled “300!” for the last time, Carter stroked a solo shot into the left field bleachers off Al Nipper’s first pitch in the top of the second inning.

It was serendipity I was at the first night game.  The game the night before against the Phillies was rained out while I played softball at Welles Park.  Somehow, we made to the finals of our league tournament, and I would rather play than watch, so I opted for a game we lost just before the rains came.

Every Cubs fan who was anyone was at Wrigley for the pageantry of that first night game on August 8th, but August 9th was more like a real Cubs game with the fans who had all of the heart but none of the cash of the guys from the night before.

The Cubs won that first night game 6-4.  Frank DiPino got the win – one of the seven he notched in his two-plus seasons as a mediocre lefty out of the bullpen – and the Cubs climbed to within 12 games of the top spot in the NL East.

I’m thinking of driving up for one of the first games.  I can sit in the Cubby Bear, feel a little of the atmosphere, laugh with friends (from a distance), and at least hear the crack of the bat as a little bit of normal creeps back into our lives.  Then it occurred to me that I don’t even know if the Cubby Bear will be open.