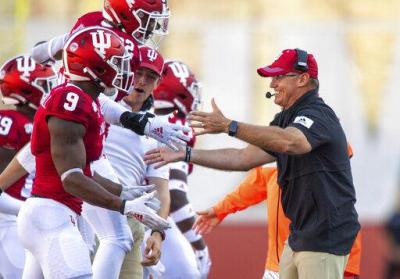 Tom Allen is a leader of men, and one of them put his hands on a woman without being shown the door.

Indiana University tight end Peyton Hendershot has been fully reinstated to the football program, and I have a problem with that.

In February, Hendershot was arrested for felony residential entry and misdemeanor domestic battery, criminal mischief and criminal conversion as the result of an incident with his girlfriend where he questioned her faithfulness, took her smart phone, put his hands around her neck and shoved her against a wall.

He has toed the line since, according to head coach Tom Allen, “(Hendershot) has completed his team-sanctioned discipline. He has completed the conduct process that we went through for the student conduct as a student-athlete of Indiana University. He completed that. He’s closed his matter with the judicial system. We have a campus committee that determines when a student-athlete is reinstated to their team and to be able to be cleared and that is the case. He’s been completely cleared and he is back with the team now fully as he completed all the things that he was asked to do.”

Allen’s comments refer to a system that has been implemented to keep a coach out of the line of fire as media and others evaluate accountability for how consequences are imposed upon student-athletes who step out of line.  And I think it is weak.

If I was a stridently anti-domestic violence coach, there is no chance that a student-athlete (no matter how wonderful in every other way) who played for me (no matter how well) put his hands on a woman under any circumstance would play for me again.  He would be gone – period.

Hendershot set the tight end IU record for receptions in a season in 2019, so his credentials as a player are beyond reproach.  He’s important for the Hoosiers’ hopes for success this season (if there is one).  I don’t know Hendershot as a human being, but let’s assume he is a spectacular young man and that incident in February was an extreme departure from who he’s shown himself to be during every other moment he has spent at IU.

He’s gone, if I’m the coach.  End of conversation.

I would continue to make myself available as a mentor to Hendershot, and would work to find him another place to study and play, but there is no way a coach and leader tell 115 other young men on his team about the evils of domestic violence without feeling like a hypocrite.  I would rather lose every football game I coached than be a hypocritical leader.

If the athletic department was so adamant about sticking to their specific regimen for disciplinary issues that I had no role is assessing a significant penalty like kicking a player off the team for putting hands on a woman, I would resign.

My wife has tried to argue me off this rigid stance regarding Hendershot, telling me that maybe something happened that would explain to an extent what he did.  I told her there is no gray area in domestic violence in my world.  Hands on a women, we are done.  There are no acceptable mitigating factors.  I’m a big gray area guy, but not when it comes to this.

I don’t know enough about the inner workings at Indiana Athletics to definitively say I believe Allen failed in his role as the leader of the football program, but I do know how I feel about any man – let alone a huge man – touching a woman with violent intent, even in self-defense.

Allen’s slogan is “LEO” which stands for “Love Each Other.”  I don’t blame Allen for loving his players, even when they step way out of line as Hendershot did, but I do hold him accountable for passing on an opportunity to take a strong stand against those who hit women.