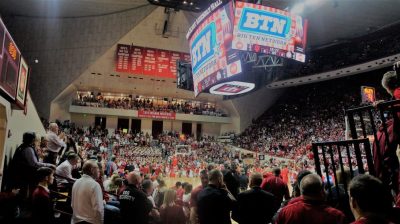 THIS is college basketball and it isn’t going anywhere because Jonathan Kuminga will skip to the G League.

So a kid named Jonathan Kuminga is going to forego his opportunity to play as a freshman at Duke or Kentucky to earn cash in the G-League, which means people are going to declare college basketball a dying game.

Kuminga is the #4 ranked player in the 2020 high school class after reclassing from 2021, joining Jalen Green, Isaiah Todd, and Daishen Nix as straight to the G-League signees from 2020.  Whenever anyone leaps past college on their way to the pro’s, hysterics yelp about how the college game will miss these rare talents.

What they don’t understand is that college basketball is marketed in an entirely different way from the NBA.  The college game is about the affinity for the school, not the players.  The NBA markets stars instead of teams.  If you went to Indiana, Butler, or Purdue, you back those programs because you belong to their community.

The anti-college honks point at a guy like Zion Williamson, and crow about how he benefitted college basketball for the five months he played for Duke.  Yes, Zion was a unique talent, but he was mostly unknown one month before the season began.  Playing for Duke helped build Zion’s brand every bit as much as Zion compelled interest during his lone season.

Look at the names of the four guys jumping straight to the G League.  Green, Kuminga, Nix, and Todd are virtual unknowns.  If they played in an event at the Best Choice Fieldhouse in Fishers, Indiana, there would be 200 people in the bleachers, including friends and family.  Not only are those four not household names like Zion became while playing at Duke, they are virtual no names.

College basketball is about the name on the front of the jersey, not the back.  In the NBA, the opposite is true, and that’s cool.  If players who want to make money immediately jump to the G League, that won’t bother college fans a bit.  The college game is built on a foundation of the affinity felt by current students, alums, and boosters who feel tethered to the school.

There are a few national programs, like Duke and Kentucky, who benefit from single season anomalies awaiting their millions in the pro’s, but the primary draw for the collegiate game is the school for which players play.

College basketball will not miss Green, Kuminga, Nix, and Todd because they were never a part of it.  I’m not going to judge those four and their families for skipping past college, but there is little doubt they had a chance to build their brand in a more dynamic way at the college of their choice.  Instead, they will earn up to a half-million toiling in front of an average of 2,465 fans (roughly what Lawrence North High School draws for its games) in Portland, ME; Grand Rapids, MI; Canton, OH; Fort Wayne, IN; or any of the other outposts with a franchise.

That’s not to deride the G League, and maybe more will show up to watch these four former prep stars play, but it will take a very long time and a lot of star power for the G League to equal the attendance or intensity of fans at Indiana, Butler, Purdue, Louisville, Kentucky, Kansas, Wisconsin, Virginia, Ohio State, Michigan State, or the other great programs that regularly sell out their arenas.

This is certainly going to be a different breed of college basketball season, which might have nudged a few of the four toward the G League, but the point is the same – college basketball is thriving, and the G League offering more cash for high school players to play in what would have been their freshman season will not change that.