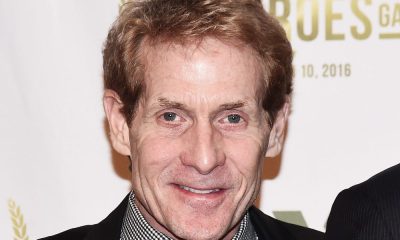 You deserve better than Skip Bayless, so demand it by not watching or reading him. The loudness of the quiet will silence his empty noise.

Like a fifth grader who puts thumbtacks on his teacher’s chair, Skip Bayless is an attention hog without the decency or moral compass to do it right.

Yesterday, on the show he co-hosts with Shannon Sharpe, Bayless claimed Dallas Cowboys quarterback Dan Prescott is incapable of leading the team because he went public with his battle against depression.  Ignorant doesn’t begin to describe his take on mental illness.

That’s par for the course with Bayless.  He is a professional noisemaker whose only meaningful metrics for success are retweets, clicks, and zeroes at the end of his paycheck.  Trying to find the truth and then artfully telling it is not a part of his equation.  There is no there there with his takes.  He’s a feckless sparring partner for those who love to yell at their TVs.

There is an oft told story about Bayless writing for the Dallas Times Herald.  The paper asked readers who they wanted as the Cowboys quarterback – Danny White, Gary Hogeboom, or Steve Pelluer.  Bayless asked who came in last, and then wrote a column about why Pelluer should be the starter.  He didn’t believe it, but he wrote it.  Multiply that by the number of columns he has written and segments he has hosted, and Bayless’s episodes of disingenuity must number in the low tens of thousands.

That’s Bayless’s game.  Grab the raw nerve and yank on it for awhile.  Manipulating his audience has made Bayless a very wealthy man.  Fox pays him over $6-million each year to sell his vapid counterpoints for two hours every weekday.

Under normal conditions, Bayless is a harmless irritant purposely humming an out of tune melody just to frustrate viewers dopey enough to fall for his act.  His attack on Prescott was more than off key – it was an irresponsible misrepresentation of mental illness and those with the courage to talk openly about it.

And if you ask Bayless this morning about it, he will grin and claim victory because people are talking about him again.  His thumbtack ruse worked, so his Twitter profile visits jumped and his Q rating grew 2%.  It was a good day for Bayless because all noise feeds him – and his bank account.

But don’t you deserve better?  Don’t you deserve pundits who can – at the minimum – seek out recognize their version of the truth and tell it.  Do you need to be angered by a soulless wretch whose only goal is to keep you coming back for more?  We earn the media we consume.  Skip Bayless being paid millions to feed us his intellectual empty calories is our own damned fault.

Media, whether in news or sports, should strive for honesty and attempt to advance the discourse.  Noise may keep the lights on and pay for fancy cars, but truth fuels our society.  We must demand better from media or we will never get truthful media.

If you are looking for columnists and media types who consistently provide their best version of their truth, I recommend The Athletic’s Bob Kravitz, 107.5 the Fan’s (Indianapolis) Dan Dakich, The Score’s (Chicago) David Haugh, Chicago Sun-Times Rick Telander, St. Louis’s Bernie Miklasz, and WDRB’s (Louisville) Rick Bozich.  There are many more, but I have either worked with or consumed for many years these sages of sports.  I have never known any of them to subvert their truth to boost clicks or audience.  And to prove it, none makes $6-mil – or close to it.

There is enough truth in sports media to feed our need for insight without listening to click sluts like Bayless, who deserves the darkness of our utter silence.

Turn him off so Fox turns him out.