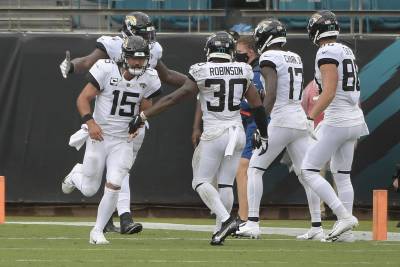 Happy times for the Jags defense, who couldn’t stop the Colts, but still found a way to win.

We know all the banal little sayings about the NFL.  “Any given Sunday,” “It’s only one game,” and “It’s not how you start but how you finish that counts,” are repeated over and over throughout the season.  Of course, they are as accurate as they are trite, especially after a game like the Colts 27-20 loss to they woefully bad Jacksonville Jaguars.

They also say, “There is no such thing as a good loss.”  That is certainly the case today.  This was NOT a good loss.  The swagger the Colts exuded in training camp did not convert to on field excellence – at least not after the first touchdown drive that gave Colts fans an inkling this might be a laugher.

A second drive that should have ended in a field goal to give the Colts a 10-0 lead was instead extinguished by the offense’s inability on fourth down to pick up a yard at the Jags three.

Media types, who looked at the schedule and felt it was a given the Colts would start 6-1, are scrambling to adjust their sites south.  They anointed quarterback Philip Rivers the comeback player of the year before throw a pass.  What I told you throughout camp was that 95% of the time Rivers was on time and on target.  The other 5% of his throws result in picks.  After the Colts signed Rivers to a one-year, $25 million deal, a lot was made of the Chargers terrible offensive line and how different he would be behind one of the best.  Upon further review, the reasons for the Chargers not going to the playoffs in five of the last six seasons evidently include their quarterback.

We saw it again and again in training camp.  Rivers would be accurate in the extreme for throw after throw until he threw it to the defense.  Sadly, the lack of velocity that keeps drops by receivers to a minimum also make him very catchable for the defense.  Rivers threw 46 passes this afternoon and 38 of them were caught.  Two of them were intercepted and led directly to 10 Jaguars points.

How weird was this game?  The Colts lost a game in which they never punted.  Jaguars quarterback Gardner Minshew threw one lone incompletion in 20 attempts, and could have easily lost.  The normally sure-handed T.Y. Hilton dropped a fourth down pass late in the game that ended all hope.  Like I said – weird game.

Colts running back Marlon Mack left the game with an injury, and the Colts running game left with him.  Nyheim Hines and Jonathan Taylor gained 32 yards on 14 attempts after Mack was carted off with what has been described as an achilles injury.  Coach Frank Reich said after the game, “I am not concerned about the run game at all.”

I love a coach who says publicly he is not worried, but if Reich is not concerned about every aspect of his team after the multiple breakdowns on both sides of the bar that led to a difficult to fathom and impossible to excuse loss to a bad football team, the problems are unlikely to be corrected.

Here are a few good things to leave you with –