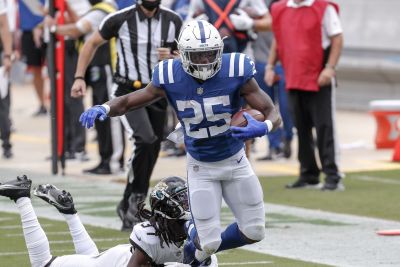 In a moment, Marlon Mack went from Pro Bowl candidate on a potential division champion to just another guy with an uncertain future.

When Covid-19 rolled into our lives early this year, I tweeted that the NFL would play because players had more serious worries than a virus.

People were outraged, called me an idiot, and said I had no understanding of the virus.  I’m not an epidemiologist – that’s true – but I understand people and their hierarchy of worries.  A virus – even one that is as virulent as Covid-19 – pales in comparison to what can befall a football player on any given Sunday.

Yesterday, we saw something far worse than a positive Covid test happen to Colts running back Marlon Mack, who tore his Achilles tendon.  His ability to play football at a high level again is in doubt, as is his chance to become a very wealthy man because of his unique physical gifts and work ethic.

That is how tenuous NFL careers are.  One play, a 24-year-old like Mack is as good as anyone in the game.  He looks explosive, like a back ready to prove his 1,091 yards in 2019 was no fluke.  The next, his season is over.  An Achilles tear doesn’t necessarily mean it’s time for Mack to choose an alternative line of work, but one third of those who suffer a tear are finished.  Most of those who do play again see a stark decline in power rating, productivity, and earnings.

Worse for Mack, he is a free agent at the end of the season, so he was in line for a lucrative deal if he put up similar numbers to the last two years when he ran for a combined 1,999 yards in 26 games.

The Colts drafted Jonathan Taylor in the second round last April because general manager Chris Ballard knows that running backs have a limited lifespan in the NFL, especially when they have a history of missing games, like Mack has.  Injuries beget injuries in football, and so stacking talented backs four deep is the right call.

For Mack, he has surgery in his immediate future and then he will begin the tedious desolation of endless rehab.  At the end of that tough road, even if everything goes as well as possible, the reward will be wary looks from skeptical GMs.  Maybe Mack gets a deal for the minimum from the Colts, who know what a good guy he is.  Maybe someone gives him a little more.

Whatever happens, Mack’s mobility and marketability will never be the same.  That’s life in the NFL.  In the spotlight cashing massive checks one day – home watching sci-fi movies the next.  A source of potential wealth for family and friends on Sunday morning, and that night – just another guy.

What it means for the Colts is not nearly as worrisome to me as what lies ahead for Mack, a hard-working young man who deserved better.  But like Clint Eastwood says in Unforgiven, “Deserve’s got nothing to do with it.”

As teammates pass Mack’s locker for the rest of the season, they will be thinking about their teammate, hopeful one day he will return, but also thankful their career continues.  As they line up in the tunnel next Sunday, they will say a prayer they find a way to leave the field as healthy as they are in that moment.

Players concern themselves first with health, wealth, family, and winning.  Yesterday’s injury to Mack serves as a reminder to us what professional football is all about, and how tenuous careers are.