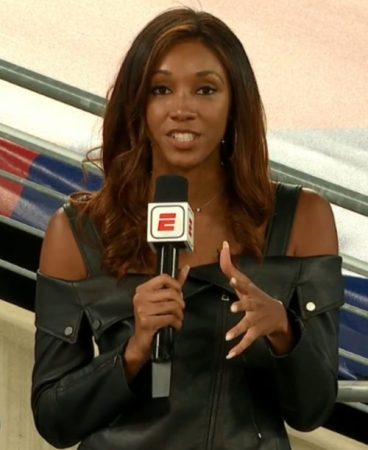 Dan McNeil mocked the fashion choice of ESPN’s Maria Taylor, so he’s a goner. Seems severe, but it was the right call.

Dan McNeil, formerly of 670 The Score in Chicago, stepped on one of the growing number of broadcasting’s third rails last night when he derisively tweeted about ESPN’s Maria Taylor attire.  He was fired today.

“NFL sideline reporter or a host for the AVN annual awards presentation?” was the text of the offending tweet, and it was accompanied by the picture of Taylor to the left.  McNeil deleted the tweet a half hour later, but the genie was already out of the bottle.  Screen captures will allow McNeil’s work to be viewed forever.

I agree with Entercom, The Score’s owner, making the call to blow out McNeil.  Jeering a person in any form has become reason for termination, so staying away from that kind of rhetoric is the the only play for anyone in media who wants to be employed tomorrow.  This is especially true in social media, where retweets and shares can turn one mean droplet into a viral tidal wave of career-changing derision.

Taylor’s response on Twitter was right on the money, “Well Danny Dearest if you would like to continue making sexist comments about me . . . please bring your misogyny with you to the NBA Countdown double header I’ll be hosting tomorrow night. Hey ladies remember you can wear whatever you feel confident in!”

I love that.  Take no crap.  McNeil fires – Taylor fires back.  Taylor took the snark, responded with a little outrage, and then wrapped it in a nice reminder that clothes are for rocking proudly.  Five years ago, that’s how these things were settled.  Taylor wins by Twitter TKO.  Now, media companies get out in front of potential peripheral outrage by whacking offenders before the riptide sweeps an entire station out to its cultural drowning.

Again, I have no problem with McNeil being fired, and would have done it myself.  Well-known media types represent publicly traded companies like Entercom, and they have all been told and told and told and told that social media is not for demeaning anyone.  If they engage in the wrong kind of shaming language, the response will be dire.

if Entercom had not acted swiftly and severely, it would have granted license to hosts in all its markets to unleash the snark.

It used to be a kinder and gentler world for those in media who treat strangers like guests of honor at a celebrity roast.  Funny at the expense of others used to be welcomed.  Hell, very successful radio shows were built on that precise premise!

Those days are over.

We have learned that amusing many at the expense of the few is no longer our most treasured social currency.  Broadcasters who humiliate in order to get a laugh are not long for their profession.

I’m not sure that makes for better radio, but it reflects the society in which we live, and it might just make the world a better place – if not as funny a place – especially for those who chafe at being the subject of mockery.

McNeil’s firing is a loud warning for others who indulge in social media insults.  What serves as fun banter in a sports bar among friends is not fit for Twitter, Facebook, IG, or TikTok.  If you are tempted to end a Twitter war with the kind of nuclear volley of insults that won you friends in high school, remember the immortal and wise words of coach Herm Edwards – “don’t press send.”

2 thoughts on “Dan McNeil fired by 670 The Score for mocking ESPN’s Maria Taylor, and they were right to”