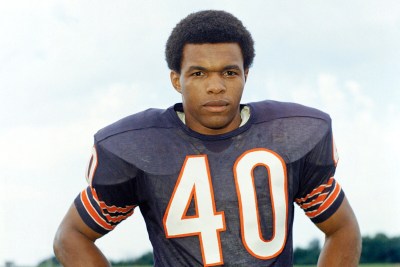 As I write this, my eyes are teary because I just watched a clip of the end of Brian’s Song, the movie that chronicled the friendship of Sayers with teammate Brian Piccolo, who died of cancer at 26.  I wanted to find the voiceover of Jack Warden saying, “It’s not how he died they remember, but how he lived.  How he did live.”  It was written about Piccolo, but suits Sayers today.

If you never saw Sayers run with the football while he was healthy, you likely remember him as Billy Dee Williams in that film, and you certainly remember Piccolo as James Caan.

But if you saw Sayers run, you will never forget the poetic beauty of his stride and ability to fluidly change direction without a loss of velocity.  Some running backs make defenders miss through abrupt cuts – Barry Sanders was brilliant at that.  Sayers made them miss as he flowed gracefully passed them.

In a game of violent collisions, Sayers brought a perfectly beautiful presence.  He was an impossible to ignore unicorn inducted into the Pro Football Hall of Fame after playing only four full healthy seasons – in which he gained 1,000 yards only twice.  That’s not the stat line of a first ballot hall of famer, but if you watched him there was never a moment of pause that his bust and highlight reel belong in Canton.

It’s a tribute to Sayers that his #40 is his alone among running backs.  There are plenty of backs who have worn Jim Brown’s #32 and Walter Payton’s #34.  The only other running back I can recall wearing #40 is Green Bay Packers Eddie Lee Ivery, who played in the early 1980s, and that seemed a violation at the time.  It’s like #40 is sacred – the number of a player with such special gifts that emulating anything about him is foolish.

I was six-years-old when Sayers’ knee was shredded during a game against the San Francisco 49ers, and even then it seemed grotesque that athleticism so beautiful could be destroyed so suddenly.  That’s a hell of a lesson for a six-year-old to learn, and Sayers then taught kids in Chicago an even more profound lesson – that tenacious and diligent work could bring a return to glory.

As Brian’s Song chronicles, Sayers rehabbed his knee to where it held up for 14 games the following year and allowed Sayers to gain 1,032 yards.  Gone was the explosiveness, but Sayers was productive enough to be named first team All-Pro despite his longest run being only 28 yards.

Yes, Gale Sayers died today, but “It’s not how he died they remember, but how he ran.  How he did run.”

(If you have never seen Sayers in action, here’s a highlight reel that gives just a brief glimpse of what was so miraculous to watch for a too brief period in the lmid-to-late 1960s.)