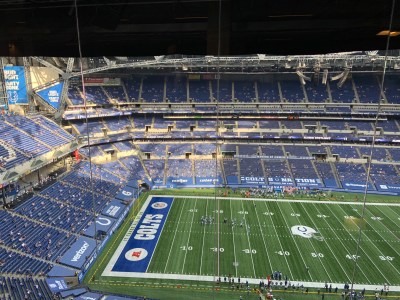 Lot of empty seats and social distancing at Lucas Oil Stadium for a Colts win.

The Colts beat a horrifyingly bad Jets team this evening 36-7, and so their record runs to a respectable 2-1.

What can we take away from the three hours of drama free football we enjoyed/endured this afternoon?

#9 – Frank Gore is a hell of a professional.  At 37, while playing for the worst team in the NFL, Gore ran hard for four quarters.  His 57 yards on 15 carries won’t make his hall of fame highlight reel, but if there was ever a question how much Gore loves football (and there wasn’t), it’s gone now.  The postgame hugs with former Colts teammates speak to the respect he enjoys in the league.

#8 – 7,500 fans seem a short number for safe attendance at Lucas Oil Stadium.  There were broad expanses of empty seats throughout the stadium.  I’m no epidemiologist, but social distancing is very possible with more people in the seats.

#7 – The Jets are wretched in every phase.  The Colts offense enjoyed an easy day.  Philip Rivers was the kind of good he needs to be for the Colts to win games.  He threw no picks for the first time in a Colts uniform, and served as a very efficient game manager.  Rivers completed 17-21 for 217, one TD and zero interceptions.  It wasn’t all dink and dunk, but he took no risks because he didn’t have to.  Clean Philip will be a winning Philip.

#6 – High scoring defense helps!  The Colts defense still has flaws, but scoring 16 points (two pick sixes and and safety) highlighted a very nice day.  It’s hard to imagine a competent defense not having a good day against the weaponless Jets, but that’s not the Colts fault.  Teams can only play the opponents they are assigned.  Never apologize for winning!

#5 – Colts have a good shot at finishing the first quarter of the season 3-1, and that is always the goal in season quadrants.  Next week, the Colts travel to Chicago to battle the worst 3-0 team in the history of the NFL, and should be able to hop home with the win.  The Bears are coming off wins against the Lions, Giants, and Falcons, – teams that have combined for exactly zero wins this season (although the Lions are threatening to get their first W in Arizona as I write).

#4 – Injury free week!  The last thing teams want in a blowout win is a late injury that changes the depth chart moving forward.  Maybe someone got dinged today, but none were evident in the immediate aftermath of the game.  There is nothing more important in the NFL that health, and after losing Marlon Mack, Malik Hooker, and Parris Campbell in the first two games, the Colts were getting thin.  This injury free contest gives them a needed breather from scouring the waiver wire to plug holes.

#3 – Xavier Rhodes might blow a coverage now and then, but his two picks today were huge.  One saved the Colts from allowing a TD and he scored on the other.

#2 – Colts receivers will all be on a balanced diet throughout the season.  Rivers and backup Jacoby Brissett hit six different receivers between two and four times.  This team does not have an alpha dog that will catch 10 balls regularly, but they do have a bunch who can help more the sticks.  In some ways, it makes the Colts tougher to defend.