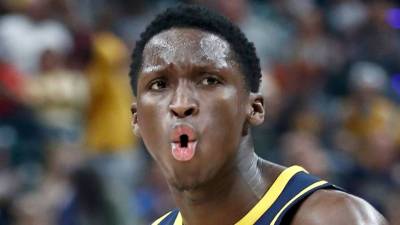 Is Victor saying “NO!” or “GO!” Who knows, but Kevin Pritchard’s ability to move him depends entirely upon the prognosis of his knee, and that is at best a guess.

Not so fast, Victor.  If the reports are true, they discount a serious factor in his ability to exit prior to becoming a free agent next offseason – he has very little trade value.  If Pacers president Kevin Pritchard was motivated to grant Victor’s supposed wish, it seems unlikely in the extreme he could get value back to offload a $21 million final year of his contract.

Kooks on Twitter have turned to various website trade machines to find deals that would be within the salary cap rules for the Pacers and teams with whom they negotiate.  Here are a few of the deals that are being proposed:

One of three results must occur in Pacers trades proposed by wing nuts – they either involve a player who grew up in Indianapolis (Hayward, Eric Gordon, Mike Coney, Jeff Teague, etc…), played college ball in our state (Edwards, Oladipo, O.G. Anunoby, Caleb Swanigan, etc…), or bring the third Holiday brother to town.

Hayward is not just a Hoosier by birth and a Butler grad as well, he has a terrible contract (a 2020-2021 player option worth just north of $34 million) the Celtic would like to shed.  That makes him very popular in the relentless torrent of deals college students propose on Twitter.

If Oladipo were still an all-star caliber player – or projected to be one in the future – the Pacers might be able to swing the same kind of sweet return they netted for Paul George – ironically the trade that brought Oladipo to Indy.

Maybe he gets back to what he was – maybe.  No one knows whether a 29-year-old with a surgically repaired quad tendon can return to 100%.  That injury for a player his age is virtually without precedent.  What is known is that Oladipo was a shell of himself in his return during bubble play.  He shot erratically and couldn’t get the corner on 34-year-old Goran Dragic.  His defense was ridiculous as well, but it was hard to tell whether Oladipo was compromised at that end because of physical limitations or utter indifference to his task.

Oladipo believes he will be back 100%, but when he guarantees a full return, he sounds like I did when my dad asked whether I was ready for an exam in junior high.  I always expressed great confidence, “I’m ready – going to ace it!”  If I came home with a C, Dad rolled his eyes.  I find myself rolling my eyes at Oladipo quite a bit these days.

Here’s some easy math; Victor Oladipo – explosiveness = an affable karaoke singer.  The only sane general managers lining up to acquire a year’s worth of Oladipo with a $21 million price tag will have their own expensive damaged goods they are looking to peddle.

Oladipo might just have to swallow hard and continue to toil for fans who once adored him.  That would make for an unpleasant and weird few months at Bankers Life Fieldhouse, if reports of his wanderlust are accurate.  Indiana residents tend to chafe at the notion that their state is not the equal of others, and the last noise the Pacers want in their newly refurbished Bankers Life Fieldhouse is the echo of loud boos.

This promises to be a fascinating offseason for so many reasons – an uncertain draft class, an uncertain financial future, and the continued iconization of marginal players like post-injury Oladipo.

The Pacers have a lot of decisions to make over the next two or three months.  The first is who their new coach will be, but that won’t be the most important.