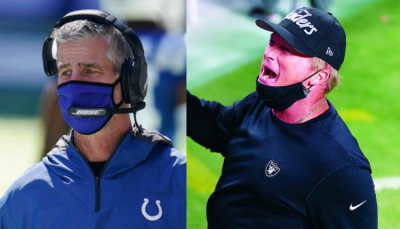 NFL coaches being forced to wear masks on the sidelines during games is absurd, but they do it because it is expensive not to.

A week after five NFL coaches were dinged to the tune of $100K apiece and their teams clipped for a quarter-mil each for mask violations, it seems the league bought compliance among coaches who decided covering both their mouths and noses served their best interest.

It didn’t help anyone else – and may have hurt the cause for wearing a mask.

I have nothing against masks.  At the very least, they make people in grocery stores more comfortable.  That’s enough for me to happily wear one.  Sure, it’s a pain in the ass to return to my car after I get to the door of every building I need to enter only to remember I forgot my mask, but that’s a small inconvenience if it keeps shoppers from fearing me as a potential killer.

But I am deadset against deceit as a tool in making the point that masks are a vital part of the fight against COVID.  Coaches being coerced through threat of lost wealth to wear a mask motivates distrust.  The truth should suffice – always.

Colts coach Frank Reich was asked last week whether he believes this mask mandate is about optics.  “To say it’s optics obviously could be taken as more of a negative statement,” he told us.  “But the NFL has a huge platform. So, optics is important at some level. We’re trying to set an example for our country so I respect the fact that the league is really running a tight ship on this stuff, with the testing.”

If wearing a mask during games protects players and coaches, why aren’t coaches required to wear them during practices?  Reich didn’t say that either.  I’m guessing the result of such a statement would be another onerous mandate from the NFL.

We also see news reporters wearing masks while knowing they are socially distant from humanity.  There are photos/videos of their photogs not wearing masks, so we are left to infer the masked reporters are complying with a mandate to communicate by example with an audience trying to figure out whether a mask will make them safer.

Through better than a half-century of overt dishonesty from our government, we have adopted skepticism as a national mood.  Optics do not help instill confidence in a cynical public for the need to wear masks.  In fact, for a significant portion of Americans, they cause a further erosion of trust.

An assumption of American stupidity is driving decisions to enhance optics over science, which ironically makes people targeted by the optics feel smart for doubting science.  How about a simple appeal for compassion if science doesn’t compel compliance?

I wear a mask, but it has nothing to do with Reich, Jon Gruden, or Ryan Pace wearing one on the sidelines.  It’s also not motivated nor validated by local and national news performers wearing one.  It’s about compassion for people who are legitimately terrified of contracting COVID and adding their names to the more than 200,000 who have lost their lives at least in part because of the virus.

Let’s start the argument to wear masks there and allow coaches to follow science.