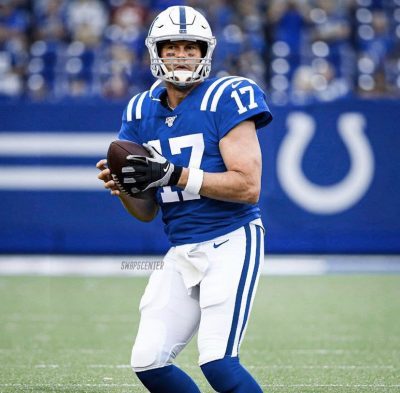 I would love for Colts QB Philip Rivers to get to a Super Bowl, but the odds are long – really long.

Minds are being lost over the Indianapolis Colts 3-1 start.  Indulging in optimism is fine, but it’s time to ratchet back the hyperbole a couple of levels.

The Colts are in a beautiful position moving forward with tens of millions under the cap to spend (or not) during the upcoming offseason.  General manager Chris Ballard has done a very nice job of building the roster from the inside out, and the future is bright.  But the future is not now.

I’m sorry Bob Kravitz, but the Colts defense is good, not elite.  The offenses the Colts have played the last three weeks have been mediocre to putrid.  The offense has been mistake-free and efficient in controlling the ball against defenses that have had trouble stopping the relentless dinking, dunking, and running of the Philip Rivers led offense.

I don’t want to be a dour naysayer, but I’m trying to save you from the inevitable disappointment that awaits us.

Here are four reasons dreams of a February trip to Tampa will remain dreams:

Opponents have been awful.  Even the Jaguars – who beat the Colts – are bad.  The Bears were the softest 3-0 in recent memory with a fatally flawed QB situation.  The Jets may not win a game, and the Vikings are ranked #23 among the 32 NFL teams.  The big tests come in November with games against the Ravens, Titans, Packers, and Titans again.  Split those games, and it will be time to get excited.

Philip Rivers is not elite.  Off the top of my head, let’s see how many quarterbacks I can think of who would definitively make the Colts better if they replaced Rivers – Russell Wilson, Dak Prescott, Aaron Rodgers, Drew Brees, Cam Newton, Ben Roethlisberger, Kyler Murray, Josh Allen, Patrick Mahomes, and Lamar Jackson.  That’s 10.  There is another tier of QBs who aren’t quite as obviously better but would be at least marginally better – Matt Ryan, Justin Herbert, Ryan Tannehill, Jared Goff, and Derek Carr.  It’s hard to get to a Super Bowl without an elite quarterback.  There are exceptions like Joe Flacco, Rex Grossman, Nick Foles, and Matt Hasselbeck, but Rivers never playing in a Super Bowl is not a coincidence.  He’s very likable, talkative, and smart, but the arm and feet need to be their equal to get to a Super Bowl.  They aren’t.

Offensive line health cannot continue.  This group of starters have been together for an uninterrupted 20 games.  That is 17 more than the NFL’s next longest active streak.  It’s inconceivable that Anthony Castonzo, Quenton Nelson, Ryan Kelly, Mark Glowinski, and Braden Smith will each start all 16 games for a second consecutive season.  Castonzo has a rib injury that may keep him out of this Sunday’s game in Cleveland.  The Colts like rookie Danny Pinter as a jack of all trades backup, but the drop-off between Castonzo and backup Le’Raven Clark is significant.

Opponents will adjust to Colts small ball offense.  The Bears dared the Colts to run by stuffing the box with eight defenders, and that is going to continue.  At some point, defenses will sell out against the run completely and Rivers’ ability to throw the deep ball will be needed to keep them honest.  That is likely not going to be a good day for the Colts.  Reverse engineering wins and losses is dangerous, but since 2015, Rivers is 19-5 when throwing fewer than 30 times (including 3-0 this season), and 19-41 when throwing 30+ times.

The Colts are a likable team who embody all the traits fans love.  They are selfless, diligent, and committed to daily improvement.  These are not divas, so they are very easy to root for – even for media types who are supposed to be indifferent to wins and losses.  It is not enjoyable for me to predict their January demise, but it is not the Colts time – not yet.

It’s more likely I will avoid a mixed metaphor than Rivers has to play in Tampa.  The Colts have a shooter’s chance to win the AFC South, but getting to the Super Bowl is a much longer and winding putt.  Sorry.