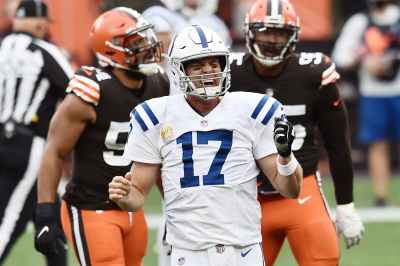 Philip Rivers is precisely what he was in San Diego and Los Angeles, and yesterday’s wobbles should have been expected. And they should be in the future too.

Colts quarterback Philip Rivers threw two ill-advised passes yesterday that were caught by Cleveland Browns defenders, and they cost the Colts the game.  Rivers did the same thing against the Jaguars a month ago.  He will do it again.

For the Chargers last year, Rivers did the same against the Kansas City Chiefs twice, Denver Broncos, Pittsburgh Steelers, Oakland Raiders, and Minnesota Vikings.  The Chargers lost all six of those games.

Rivers is a good guy and quarterback, but there is no more troubling trait for a quarterback than a penchant to throw interceptions.  It’s because of those interceptions Rivers has never played in a Super Bowl, and is not going to.  Again, this is not an attack on Rivers – it’s a simple accommodation of an unpleasant fact.

This isn’t even a criticism of Colts general manager Chris Ballard, who signed Rivers to a one-year/$25 million deal to step into the breach as a replacement for Andrew Luck over the top of Jacoby Brissett.  Nor is this an indictment of Brissett, who is one of the better backups in the NFL.  When Andrew Luck walked away from the Colts just over 13 months ago, Brissett had the best chance to lead the offense to mediocrity – and he did.

After losing to the Browns, the Colts are 3-2 with two games remaining against poor teams that should launch them to 5-2.  Colts fans are going to be very pleased with Rivers after these two games.  They are going to believe Rivers has turned the corner, leaving his bad decisions and throws behind him.  Sadly, the next four games will be against the Baltimore Ravens, Tennessee Titans, Green Bay Packers, and Titans again.

Those games will be seen as an opportunity for Rivers to confirm his position among the NFL’s elite, and it will not happen.  Rivers at the age of 38 is a known commodity.  He is who he is, and unfortunately, interceptions he threw in San Diego and LA were a part of the equation that kept the Chargers out of the playoffs five of the past six seasons.  And they are the reason the Colts have lost twice.

This isn’t an indictment of Rivers, Ballard, coach Frank Reich, offensive coordinator Nick Sirianni, or owner Jim Irsay.  Elite quarterbacks do not grow on trees, and they rarely hit free agency.  The Colts had an elite quarterback in Andrew Luck, who suddenly bailed on his team.  He left the Colts to scramble to find a replacement.  Brissett was not it – and he didn’t project to become it.  Rivers was acquired as a stop-gap upgrade, and he has been exactly as expected for people who know what they ware watching on Sundays.  He is what he has been – and what he will be.

The Colts are building what they hope in a championship culture, and Rivers’ presence may provide a step in that direction despite the very remote possibility he remains the quarterback if it bears fruit.

We judge the Colts each week based upon the success or failure of each game.  The Colts failed yesterday because of three poor decisions by Rivers – including the safety that took the Browns to a two-score lead.  They succeeded the previous three weeks because Rivers failed to make critical errors.  It might be better for everyone if we watch the Colts without becoming jaded about predictable lapses and resulting losses.

The Colts are not going to the Super Bowl this year.  They may not go to the playoffs.  Because of his age and mistake prone performances, Rivers is not the franchise quarterback the Colts need.  Because he is indecisive and slow-footed, Brissett won’t lead the Colts to the Super Bowl either. Jacob Eason?  Who knows whether he will be the heir apparent to Johnny Unitas, Bert Jones, Peyton Manning, and Andrew Luck?  I love his arm, but there are reasons he fell to the fourth round.

Given the utter folly of current Super Bowl dreams, let’s enjoy the Colts with Rivers for what they are – a young team with an old quarterback that will win some and lose some.  Don’t get too high or low, and stay away from judging Ballard for signing Rivers.  He knew what he was getting, and we should see where to Colts are headed rather than wallowing in Rivers murky current of mediocrity.