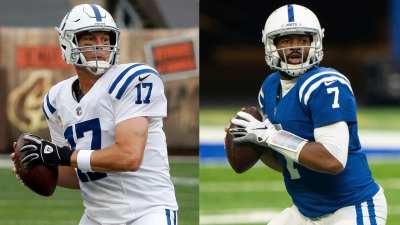 The next quarterback to lead the Colts to a super bowl is not in this picture.

He made an indefensible throw that resulted in a pick six, and threw another pass in the direction of no one in particular while he was in the end zone.  That resulted in a safety.  When a quarterback scores nine points for the other guys in a nine-point loss, fans get agitated.

Colts fans are more than nervous.  They are panicked as they debate the merits of potential immediate replacements for Rivers like Matt Ryan and Sam Darnold.  Because Peyton Manning schooled this fanbase as to what championship level quarterback play looks like, they have dismissed Rivers as unworthy after five games.

Brass on 56th Street is not ready to so quickly jettison the idea of Rivers as a winner.  They see the good and hope the lapses pass.  Coach Frank Reich is being relied upon to prop Rivers up and put him in a position to succeed.  People are not happy it didn’t happen Sunday, and not just fans.

This is a prudent and measured front office and coaching staff.  They will not show their asses and toss Rivers under a bus.  Nor will they ante up offensive coordinator Nick Sirianni as a sacrificial lamb – as a previous coach did with Pep Hamilton when his seat grew a little warm.

It’s understandable the Colts believed Jacoby Brissett needed to be replaced after he languished through 2017 (as a suddenly acquired replacement for an injured Andrew Luck and decrepit Scott Tolzien) and 2019 (for a suddenly retired Luck).  He made slow reads and decisions in the pocket that stifled the offense.  In his 30 starts, Brissett’s plodding prudence and risk aversion cost the team opportunities to win.

Rivers was advertised as a quarterback who was stuck behind a leaky Chargers offensive line but would thrive behind Quenton and Company.  He has performed as he did in San Diego and Los Angeles, exercising occasional reckless decisiveness that led to two losses in his five starts.

None of this is good, and if fans who expect the 2020 season to not end well should prepare to celebrate being so smart.  Rivers is a quarterback who will cost his team games, as he has always been.

Two times in his last six seasons with the Chargers, he led the NFL in picks, and in 2017 Brissett led the NFL in sacks.  These guys are neither Manning nor Luck.  They are who they are – roughly .500 quarterbacks (Rivers is 80-85 in the regular season since 2010; Brissett is 11-19) who have fatal flaws for a team wasting a defense capable of holding leads.

This season was always going to be goofy once Rivers was signed to a one-year, $25 million deal.  The question of why the Colts settled on Rivers instead of pursuing Tom Brady and Cam Newton is a good one.  Ballard and Reich tried to sell Rivers as the guy who could get the Colts to the next level, which was a mistake.  That’s not who he is, was, or will ever be.

But he is going to be the guy the Colts rely upon to win games through the end of this season.  He is likely to calm irate fans the next two Sundays as they should dispose of the Bengals and Lions.  Then the road to a championship will end at the edge of a cliff against the Ravens, Titans, Packers, and Titans again.

And this discussion will begin anew.  Sounds like a fun way to spend November and December.