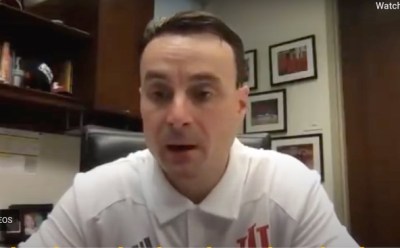 Archie Miller speaks to the media about his fourth IU team – a team that needs to succeed at a higher level than the first three.

Today, Indiana Basketball will be back on the court for an official practice for the first time since the 2019-2020 season was shuttered after IU defeated Nebraska in the first round of the Big 10 Tournament in Indianapolis, and I’m feeling good about the Hoosiers.

This, though, is the last time I am going to allow fanboy optimism brighten my mood about Indiana Basketball before I actually see a reason for it with my own eyes.  Hopefully, it’s the last time I need to.

Archie Miller is now the sole owner of what the Hoosiers are.  All of Tom Crean’s players are gone, and so it is finally time to view this program through the prism of Miller’s ability to get Indiana back to a place of prominence in college basketball.  The guy can either coach or not, and in year four we will find out.

The pass Miller was allowed for the first three years of mediocrity has expired, and this roster has the unique combination of experience, youth, and talent to be able to contend in the Big 10.  Indiana returns four starters in Al Durham, Rob Phinisee, Trayce Jackson-Davis, and Joey Brunk.  Also back are contributors like Jerome Hunter, Race Thompson, and Armaan Franklin.  Freshman phenom Khristian Landers, Anthony Leal, Jordan Geronimo, and Trey Galloway round out the 11 scholarship players.

The cultural re-plate from the final Crean years appears to be complete.  Gone are the east coast summer stars who were brought in through relationships with assistant coach Kenny Johnson.  Seven of the 11 who are fighting for rotational spots, including three returning starters, played high school ball in Indiana, and so are three of the four freshmen.  So, just as Indiana fans like it, Indiana Basketball’s roster is filled with Indiana basketball players.

The schedule – other than the first round game against Providence in the Maui Classic – has not been finalized, so projecting the number of wins or how the Hoosiers might build a resume’ for the NCAA Tourney is impossible.  This will be a different kind of season with a maximum of 27 regular season games, perhaps none against cupcakes, and the typical criteria for NCAA Tournament selection is gone.

So judging Miller’s role in Indiana’s success or failure is going to be difficult, just as it was last year.  IU was occasionally very sound last year in building a season that would almost certainly have finished with Miller’s first trip to the NCAA Tourney as the Hoosiers’ coach.  Because of fears of COVID spread, it ended after that win against Nebraska.

Since Bob Knight was fired in 2000, Indiana has a cumulative Big 10 record that is just two games over .500.  The bar is still way up there for some.  “We have to perennially contend for Big 10 Championships,” said former athletic director Fred Glass when he hired Miller.  Through three seasons, Miller’s Hoosiers have finished sixth, eighth, and tenth.

That is nowhere near contention.

But those three years are in the past, and 2020-2021 gives Indiana fans the greatest potential for quality play since Miller was introduced at that happy ceremony at Simon-Skjodt Assembly Hall when Glass’s bar was set.

Miller said yesterday in his annual media day appearance that Indiana needs to limit turnovers to win.  Hard to argue with that.  Indiana fans learned a long time ago that limiting errors is the best path to winning.  Players were unanimous in declaring this a very positive offseason with players holding each other accountable for attendance and effort at voluntary workouts.

That kind of thing has been said at every media day – regardless of the team, sport, or level – in my memory.  The sell lines are well rehearsed, and the message of hard-working student-athletes balling out for the glory of Old (insert university name here) is always delivered to media, who lap it up without dissent.

Does any of this mean a damn thing?  Not really.  My willingness to buy what IU is selling is directly proportionate to my dissatisfaction with challenges related to COVID and other societal issues that grind on us.  I cannot allow myself to be skeptical about everything, so I am willing to look at the Hoosiers with hope for brighter days.

I believe in Miller’s recruitment of Indiana kids.  I have long held that basketball is played by Indiana’s children at a higher level than most other places, and that a team of Hoosiers would out-execute kids from other regions.  Miller’s willingness to give that ideology a shot has me tethered to his corner, and I hope his Hoosiers will validate my belief.

If not – and if normal life returns so my angst can be directed toward frivolous matters like Indiana Basketball – I may turn as surly as I became during Crean’s final season.