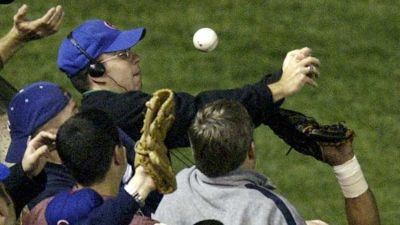 It’s been 17 years, but idiocy is still idiocy.

Seventeen years later, I still blame Steve Bartman for screwing up the Cubs chances of playing in their first World Series since 1945.  I am aware that doesn’t make me a great human being, and that I might have some issues to work through as I move glacially toward enlightenment.

Sure, there were other moments in that game that changed its course.  Alex Gonzalez bobbled a ground ball that might have ended the inning and allowed the Cubs to win.  The next night, Kerry Wood wasn’t at his best against the Marlins and should have plunked Pudge Rodriguez in the top of the first (it’s a long story).

To my credit, when I had an opportunity to sacrifice the billy goat that was led through the Billy Goat Restaurant on Clark Street prior to Game Seven, I passed.  It was unclear in my mind whether killing the goat would put an end to the curse placed on the Cubs during the 1945 World Series when a similar goat was denied a seat at Wrigley Field, so I decided it should not murder a defenseless animal that did not know a baseball from a cantaloupe.

I could choose be furious at the guy who occupied the seat next to Bartman.  He was equally eager to disrupt the decent of the foul pop headed for left fielder Moises Alou’s mitt.  Or I could hold culpable the entire Game Seven crowd of which I was a part who brought such a miserable and hopeless mood into Wrigley the next night that a loss was virtually guaranteed.

I am pissed at Bartman – the strange fellow in the green turtleneck, glasses, and oversized headphones who has still never granted an interview to explain either what he was thinking in the moment or how that night changed his life.

Maybe “pissed” is the wrong word.  I wish Bartman no harm or consequence for his role in the eighth inning meltdown that crushed the spirit of that team and fanbase.  If I ever met him, a hug, beer, and jovial conversation would be his.  But as I watch replays of his effort to catch that foul ball, my response is always the same, yelling “F***ING BARTMAN!”.

My wife always counters that shriek by trying to explain that he did what every fan does by trying to snag a souvenir.  I patiently explain the responsibility of fans in the front row to avoid interfering with a ball that could be caught – by a Cub.  If Bartman put his hands between the ball and Marlins left fielder Jeff Conine that night, he’s a hero!   But he didn’t.

It’s also explained to me when Bartman comes up that if he didn’t look so goofy and guilty, we wouldn’t judge him the villain of a game bought a ticket to experience, not affect.  True.  I have to grant that.  Bartman looked like a 10-year-old who got caught stealing baseball cards until ushers finally escorted him away.  If he had immediately owned what he had done, his life would be different.  Or if he had pointed at the schlub next to him, we would have likely forgotten about him in the confusion.

But he didn’t, so Bartman is a pariah among irrational Cubs fans – an all-inclusive subset of silly boob in which I proudly align.  His club is smaller than you might think.  Members include the aforementioned goat, Charlie Grimm (for malfeasance during the 1945 World Series), Don Young (for misplaying a fly ball in 1969), and Leon Durham (for allowing a ground ball to roll through his legs in Game Five of the 1984 NLCS).  That’s it.

Bartman is welcome in my home any time.  No harm will come to him if we meet, and I will join in any effort to repel a physical threat against him.

But the 2003 collapse is still his fault.