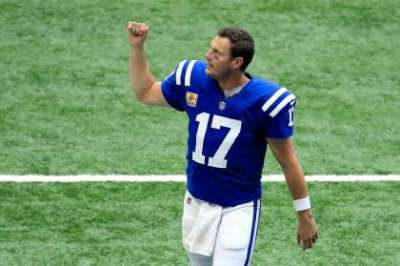 Philip Rivers was smart enough to enjoy the moment yesterday after beating the Bengals. We should be too.

I’ve come to praise the Indianapolis Colts, not bury them.  The burial may come later, but let’s not rush into things.

The Colts won yesterday, so the last thing I want to be – or anyone should be – is negative.  All of us have enough to worry about with COVID and a presidential election just 15 days away, so why jump the gun and act like we know more than we do about Philip Rivers & Company’s pending fortunes.

Yesterday’s win was the biggest comeback in the history of the franchise in a regular season home game.  That is a reason to celebrate, not mourn.  Sure, the first 15 minutes were hideous, but the last 45 should have washed that sour taste out of our mouths.

Yet I look at the 4-2 record, cobbled together against teams that are a combined 12-23-1 (including a 5-1 Bears team not nearly as good as its record suggests), and I cringe knowing what lies ahead.  After a game against a mediocre Lions team, the Colts play their next four against the Ravens, Titans (2x), and Packers – teams sporting a 19-2 collective mark.

This season has been a bit like a downhill bike ride where we have enjoyed churning the pedals with relative ease before we hit a vertical incline that will seriously test our fitness and resolve.  We have no reason to believe we won’t be able to gear down and keep moving forward, but there isn’t a hell of a lot of evidence to believe the ride will be completed without falls or failure.

Philip Rivers was good yesterday.  In fact, he was better than good, completing 29-of-44 passes for 371 yards, three TDs, and a single pick.  That’s the Rivers that wins games.  The knock on him with the Chargers was that he could manage wins from out front, but fall behind and it’s big trouble.  Yesterday, he found a way to outscore the Bengals 31-6 after the initial onslaught.

On the other side of the ball, the Colts defense was bad until it was good.  It was vanilla with a soft zone and minimal pressure with only the four defensive linemen until coordinator Matt Eberflus started dialing up blitzes and more exotic coverages.  The final blitz causing Bengals QB Joe Burrow to hurry his way into throwing the game-ending interception by rookie safety Julian Blackmon.

Anyone with a passing knowledge of football sees the flaws in the Colts, but this is not the time to dwell on the negative because at 4-2, all is still possible.

At a party once, Rams hall of fame sack king Deacon Jones was maybe a little too happy, and my wife asked if she could get him a glass of water.  Jones said, “What, and ruin this cool vodka buzz?”  That’s where we are as Colts fans today.  We have a cool vodka buzz working.  A hangover might be headed straight toward us like it did for Deacon the next day, but why ruin the present with worry about the future?

The Colts won yesterday.  Rivers looked good.  The defense closed the door on the Bengals.  A fourth-year pro named Marcus Johnson with 32 catches for 502 yards in his career prior to yesterday went off for five and 108 to make us forget about injured weapons like Parris Campbell and Michael Pittman.  Kicker Roberto Blankenship was perfect – again.

Keep reveling in the good, ignore the bad, and smile.  The uphill portion of the season is coming and its likely hangover looms.  But let’s enjoy the day, rather than cower in fear of the future.

Maybe the climb won’t be so tough and the hangover not too painful.  There is no glory in being a pessimist who is right all the time, so relax.

One thought on “Colts are 4-2, and nothing else matters – enjoy these good times without being pessimists”