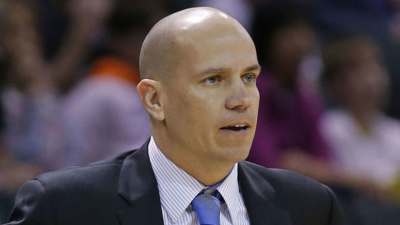 If you see this guy on Pennsylvania Street, greet him warmly. He’s Nate Bjorkgren, the new coach of the Indiana Pacers.

If there was any doubt Indiana Pacers president Kevin Pritchard gets cozy with Woj, it left when news broke today that he would hire former Toronto Raptors assistant Nate Bjorkgren.

Throughout the process, names were mentioned in the national media, but rarely Bjorkgren’s.  We heard Mike D’Antoni, Darvin Ham, Chris Finch, Chauncey Billups, Dan Craig, and Dave Joerger, but very little about Bjorkgren.

One of the few Bjorkgren sightings was in an interview with Raptors head coach Nick Nurse, where it appeared the mentor was stumping for the protege.  Some put him on their list – including me – because Bjorkgren is well-respected with a 2019 NBA championship.

We are hustling to learn everything we can about Bjorkgren prior to the Pacers Zoom introduction tomorrow morning at 11a because unless you are a serious deep-dig guy spending late nights studying NBA staff bios, you may not know a single thing about Nurse’s wingman.

So just who is the Pacers new head coach?

Bjorkgren, like most coaches, is a basketball lifer.  He grew up in Iowa, played as a walk-on at South Dakota, and became a high school coach immediately after graduation.  He followed his dream at considerable financial peril moving from his high school job to a volunteer position for the Iowa Energy of the G League where he worked for Nurse.

Prichard describes Bjorkman in the press release announcing the move as, “innovative and his communication skills along with his positivity are tremendous. We all look forward to a long, successful partnership in helping the Pacers move forward.”

What the results of this hire might be are impossible to predict.  Will Bjorkgren fit with the roster?  Will he bring in a staff that can develop players at a higher level than the previous group?  Will he switch ball screens when the two defenders are similar size and length?  We sure hope so, or what’s the point?

Here is a 15-minute biographical video produced by the Raptors where Bjorkgren shares a lot about himself.  If some of it sounds eerily familiar, it’s where I learned most of what I know about Bjorkgren.

If only Pritchard didn’t know how to keep a secret, I would have been able to prepare for a few hours to write about this former assistant coach who will now be trusted to the Pacers.