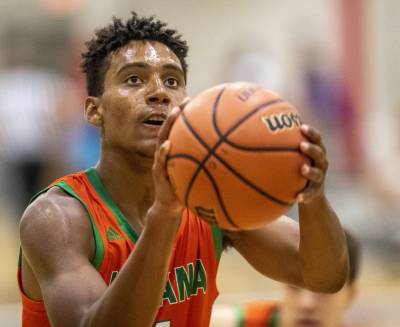 Wherever Trey Kaufman goes to school, fans need to understand he’s a teenager who has the right to make a mistake.

There are very few coaches I would rather send my son to play for than Purdue’s Matt Painter, so I am sure Trey Kaufman will have a great experience as a Boilermaker, if 247sports Indiana Insider Mike Pegram was correct in predicting his commitment scheduled to be announced tonight at 6p.

Kaufman will have a great experience regardless of which school among his finalists he chooses.  How could playing basketball at North Carolina, Virginia, Indiana, or Purdue suck?  Kaufman is not just the 31st best player in the 2021 recruiting class, he’s also the #1 student in his Silver Creek High School class.  He’s clearly smart enough to make the most of educational opportunities at any of those august institutions.

The great thing about being Kaufman is that he wins no matter which school he picks.  The only losers in these recruiting battles are the coaches and programs who miss out on securing the services of a basketball player who can help win games.  And if Pegram is right, this would be a big loss for Indiana and Archie Miller.

To this point in Miller’s three-and-a-half years in Bloomington, he has kept his promise to successfully recruit kids from Indiana – especially those from southern Indiana.  Romeo Langford, Trayce Jackson-Davis, transfer Joey Brunk, and Khristian Lander all attended Indiana high schools south of I-70 before pledging IU.

Losing out on a recruit from the northern part of the state is understandable.  Caleb Furst, Sasha Stefanovic, Isaiah Thomas, Caleb Swanigan, and others from northern Indiana have recently opted for Purdue and Painter.  Back in the day, the same thing happened with Robbie Hummel, E’Twaun Moore, and Scott Martin  No problem there.  Staying close to home to play for the geo-friendly team makes sense.

When Rob Phinisee left his hometown of Lafayette for Bloomington to play for Miller, that seemed weird – even for IU fans.  Phinisee was warmly welcomed at IU, but it just seemed odd for a kid in Purdue’s backyard to choose to play for a program his neighbors hate.  Now Indiana may lose the same kind of recruiting battle for a recruit to their rival.

Indiana will survive this loss – again, assuming Pegram’s confidence in his crystal ball is well-placed.  Miller is still in the game for Mason Miller (6’9″, skinny, really good shooter) and Aminu Mohammed (6’4″, #14 in 2021 class).  To this point, Miller has been very effective targeting a small number of prospects, building relationships and closing the deal.  He’s hit on more than he has missed, and that needs to continue if ground will be made up between where IU wants to be and where they are.

Fans who were around during the glory days pine for the Hoosiers return to relevance.  A quick look at results tells us that IU has put together only one winning Big 10 season in the last seven, not been invited to the NCAA Tournament since 2016, and lost seven straight to Purdue (including all five games Miller has coached).  That may be part of the calculus Kaufman uses in making his decision. The great catch-22 of basketball is that good players are needed to win, but winning (or cash) is needed to get good players.

Miller has churned along moving forward in recruiting since replacing Tom Crean, but the results have yet to show similar growth.  The recruiting bridges that Crean burned within the state’s borders have been mended, so IU doesn’t have to call Boo Williams every time they have a scholarship.  They aren’t bringing in roster fillers anymore.  Indiana is going to be better this season, but that may not be enough for in-state recruits, regardless of proximity to campus.

We’ll find out at 6p tonight whether Pegram’s prognostication is accurate, and we can draw conclusions as to why a teenager made the choice he did.  Then we will overreact, make wild declarations about Miller as a leader of a program almost 34 years removed from its last championship, and continue to hope for better days.