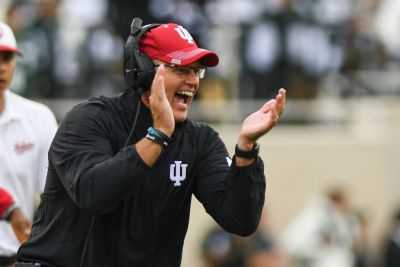 Tom Allen keeps giving Indiana Football fans reasons to clap and smile as much as he does.

Love each other!  Nice life philosophy, although enough people have talked that talk without walking the walk that viewing those who proffer it are often viewed with suspicion.

LEO is what Indiana University football coach Tom Allen says – a lot.  When he took over from Kevin Wilson, Allen spoke passionately about love among those within the program.  Wilson was a more traditional coach who did not talk about love nearly as much as toughness and respect.

Former Indiana athletic director Fred Glass told me he believed Allen to be THE right guy at THE right time to lead the Hoosiers from laughing stock to regular bowl participant and then to a Big 10 power.  Again, this is the kind of talk Indiana fans and media have heard from ADs for time immemorial.  We heard it about everyone who followed Bill Mallory.

“Cam Cameron is the guy!”

“Gerry DiNardo is the guy!”

“Terry Hoeppner is the guy!”

“Bill Lynch is the guy!”

Suffice it to say I was suspicious of Glass, Allen, and the prospect that Indiana University could ever land “The Guy.”

Well, what do you know.  Maybe Glass was right, and maybe Allen is not some hypocritical preacher who extolls the power of love in a venue of wanton violence.  Maybe he’s a guy whose rhetoric cuts through the typical coach speak to resonate with recruits and parents who are looking for a home; not just a weight room and pedigree of success.

Last year, Allen’s Hoosiers won eight games and went to a bowl in Florida.  Bragging about a season like that will get SEC and some Big 12 coaches fired, but at Indiana it causes mopes behind keyboards to rethink their long-standing positions as IU Football cynics.

Follow that up with two wins – one at home in overtime against #8 Penn State and the second on the road against Rutgers – and a long walk of reflection ensues.  This kind of walk is not for pseudo-exercise, but to ruminate on the possibility that I was wrong about Allen’s fitness for this job.

It’s been so long since a head coach felt like the right guy that I didn’t recognize it when it happened.  I liked Allen a lot as the defensive coordinator.  His enthusiasm during our first conversation was infectious.  I felt like running through a wall – or at least through the breakfast buffet (again) on that National Signing Day celebration in 2014 at Memorial Stadium.  When he replaced Wilson, I thought about my affinity for Wilson and the longstanding truism about coaching – that the 18-inches between the head coach and assistant is the longest foot-and-a-half in sports.

I saw Allen jumping up and down in celebration, berating officials, and exhibiting other living-in-the-moment behavior, and thought he was in over his head.  Solid coaches are always thinking about what’s next, not what’s been.  I may have underestimated Allen’s ability to multitask!

There is no arguing against eight wins followed by a 2-0 Big 10 start without sounding like some kind of loon.  It’s time to acknowledge that at the very minimum Indiana continues its evolution from laughing stock to proud program regularly playing a 13th game somewhere warm.

Speaking of the number 13, the Hoosiers are now the 13th ranked team in the country.  That’s something they have done once in more than a half century – in the halcyon days of 1987.  In the past 30 years, as soon as Indiana achieved something like this, fans assumed the light at the end of the tunnel was an oncoming train.  This time it might be different.  One significant reason for that difference is Allen’s belief in his team, and the infectious way he communicates it.

Before the Penn State game, players were convinced they would be able to beat the Nittany Lions.  Faith isn’t all that’s needed to beat a top 10 team, but it’s one of several required components.  Talent is another, and Allen has done a great job of finding fast Floridians capable of running, hitting, and executing with contending Big 10 teams.

I’m sorry, Tom.  I didn’t see it coming.  I should have trusted you.  I was wrong.  That kind of admission from me is called for just about as often as Indiana is ranked #13.