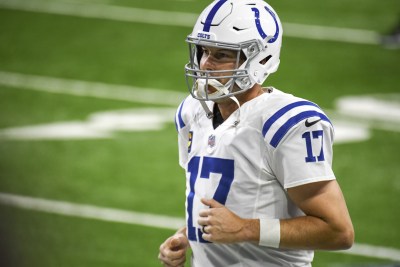 Philip Rivers is worthy of adulation as a human being, but he’s not taking the Colts to a Super Bowl.

If you’re a Colts fan, get over the disappointment yesterday’s loss generated.

Take a deep breath, understand the limitations of this team’s offense, and stop the depressing din of doomsaying.  Teams among the NFL’s best are going to beat the Colts, and lesser teams will lose to them.

That’s just what the Colts are – an OK team capable of winning and losing in equal measure.

Did fans believe the Colts would run the table through this November stretch of upper echelon teams?  Have the Colts shown the potential to get to the Super Bowl by beating the Vikings, Jets, Bears, Browns, and Bengals?  Was it likely that a quarterback who was sub-.500 in his last decade in San Diego and Los Angeles suddenly morphed into an elite gunslinger?

The answers are no, no, and no!

The good news is that yesterday’s loss against the Ravens showed the Colts can at least compete against the best teams in the AFC.  If not for the turnovers, the Colts might have won.  That’s a good thing – kind of.  The negative aspect is that they need to play almost perfect football in order to beat teams like the Ravens – which means teams with superior quarterbacks.

Now I love Philip Rivers, and hate pulling back the curtain to show what he actually is.  Rivers is a father of nine and a wonderful human being, by all accounts.  He is relentlessly positive with teammates, and expansive and accommodating with the media.  People who spend time with him are better for the experience.  Those attributes are far more important in the grand scheme of life than passer rating and QBR.  But as a quarterback, Rivers is not dynamic enough to overcome errors. When he throws a pick, it’s big trouble for the Colts.

When the Colts turn it over twice, they might as well turn out the lights.

Add a lack of anything resembling a #1 receiver for Rivers to throw to, and the Colts defense is going to have to carry a disproportionate amount of the weight in earning wins against any team.  The defense has been somewhere between solid and superb in every game this season, but that isn’t good enough against teams with elite level quarterback play.

The rest of November is critical for the Colts in their quest to win the AFC South, which is still a possibility.  If the Colts can beat the Titans twice, they have a shot at the crown.  Happily, the Titans are not among the AFC’s best teams despite their 6-2 record.  Ryan Tannehill is not elite.  He has been the best version of himself since joining Tennessee, but there are more similarities than differences between Tannehill and Rivers.  The Titans have Derrick Henry, which is a significant upgrade over the Colts three-headed backfield monster.

The positive difference for the Colts is on the defensive side of the ball.  The Colts defense is good enough to make the Titans struggle to score, and if they can force a turnover or two, winning twice in the next three weeks against them is a possibility.  Had the Colts defense of the 2000s been this dynamic, Peyton Manning would have won at least another two Super Bowls.  We can’t blame Rivers for not being Manning.

Colts fans need to understand the flaws of this offense are absolutely fatal against superior teams.  It’s hard to shake off a generation long belief that your team is championship caliber, but if you insist upon buying into the possibility that the Colts could miraculously find their way to as February game in Tampa, you are inviting certain disappointment.

This season may be a step toward a Super Bowl, but it is not a season that can end with one.  Rivers is a competent upgrade over Jacoby Brissett on the way toward a franchise quarterback capable of banner-hanging magic.

Maybe that guy is Jacob Eason, and maybe not, but the quarterback who will take the Colts all the way to February was not on the active roster yesterday.

That may be an unpleasant truth, but most sports truths are.