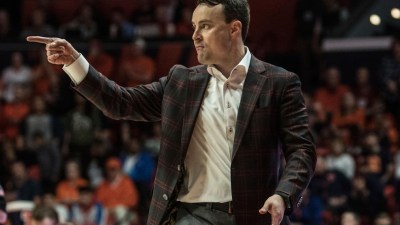 Basketball is a funny game. In 24 hours, Archie Miller’s Hoosiers have gone from destroying Providence to being destroyed by Texas.

Well, Indiana’s 66-44 loss to Texas was such a tough watch that ESPN analyst Bill Walton was easily the most entertaining part of the broadcast.

The question of whether the Hoosiers dominated Providence by 21 because of how soft the Friars was answered emphatically.  Indiana struggled to create open looks and were abysmal in converting the many contested shots they had.  The wide open passing lanes Providence allowed were well covered by the longhorns, and the uncontested rebounds the Hoosiers snared yesterday belonged to Texas.

At no point did Indiana threaten to turn this into a game.  In fact, this contest was very much like yesterday’s game in which Indiana led from stem to stern only in favor of Texas, who were longer, faster, tougher, and, well, I could string together another dozen comparative adjectives, but what’s the point of that?

This is the kind of loss after which fans talk themselves off a cliff by saying their team will be better for the many lessons learned.  That might be true, but after 40 minutes of almost nonstop offensive ineptitude, it is hard to imagine what will happen to correct IU’s lack of ability to create open looks through scheme or talent.

Truth be told, I’m writing this with roughly eight minutes left in the game to distract myself from the Hoosiers’ unending malfeasance and Walton’s relentless yammering about literature, Mickey Hart, Johnny Davis, and Camping World.  It’s an afternoon of misery that will be quickly forgotten by everyone except Archie Miller, who needs to quickly find the answer to the riddle of how Indiana can score.

To this point in the game – 32 minutes in – IU has a total of eight made field goals.  If you possess something less than mad math skills, that’s an average of one field goal every four minutes of game play – or a lone bucket between each TV timeout (including the halftime stoppage).

To add injury to insult, Al Durham just left the game with a sprained ankle.  Without Durham for any period of time, the Hoosiers will need to rely on Khristian Lander, who despite wayward  shooting (1-8 from 3s), has shown himself to be quite capable as a young freshman.

Are there reasons for optimism after a game like this?  You bet there are!  Here are six!

The last three statistics are amazing to me. I never would have guessed any are true.

IU’s offense was so utterly inert there will be questions from fans about Archie Miller’s capability as a coach.  In scheme and talent, this group showed itself to be incompetent today and provided few hints of a potential upswing in conveying the ball into the basket.

Fans need to remember it is December 1, and this is a young group with only two seniors – Joey Brunk, who has yet to play because of a bad back, and Durham, who left with his ankle issue.  Youth is no longer an excuse defenders of Miller can use to keep alive the dream of a rebuild.  Miller has been the coach for nearly four years, so IU Basketball is what it is, and it needs to be better.