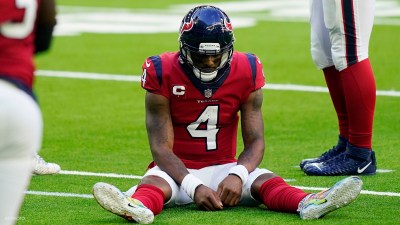 Deshawn Watson is dejected because his fumble did not allow the Texans to take advantage of Colts penalties that could have won the game.

Coaches will always tell you that victory favors the team making the fewer mistakes.  In other words, screw ups are more likely to determine the winner of a game that highlight reel plays.  Such was the case yesterday in Houston.

The Colts appeared to be the better team throughout their win against the Texans, but there was Deshaun Watson at the Colts two-yard line with 1:28 left about to take a lead the Colts would be challenged to overcome.  Watson fumbles the snap, Grover Stewart bats it away, and Anthony Walker recovers.  Colts win.

But there were chances for the Colts to put the game away prior to that, and penalties were a big part of how that didn’t get done.

The Colts committed nine penalties.  Some were unimportant, but others had a massive effect on game flow.  Here are the nine penalties graded by their severity and potential to impact the result.

The total points the Colts cost themselves was a minimum of six, and they gifted the Texans four.  That is a net -10 for a team that could have very easily lost by one.

The impact of penalties on a game can be huge, and the impact of a game on playoff eligibility is massive.  Yesterday’s win could be the difference between playing and sitting at home the second weekend in January, and penalties could have caused a shift in the result.

Playing against a 4-8 team like the Texans allows a team like the Colts to win despite massive game-changing errors.  Against playoff teams, this level of sloppiness will end the Colts season.  Their offense is just not dynamic enough to overcome negative field position shifts.

Penalties didn’t bite the Colts on the backside yesterday, but they very easily could have.  And if they don’t get cleaned up, they will.