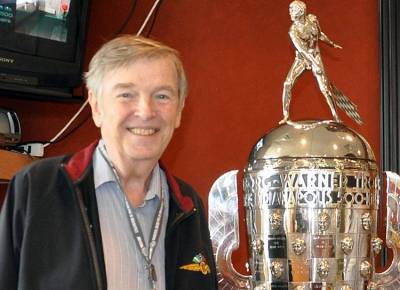 For a half-century, Donald Davidson spoke about those who made the Indianapolis Motor Speedway world famous, and then he become one.

Did you hear the one about the guy who loved talking so much about the men who made the Indianapolis Motor Speedway famous that he actually became one?

That’s the story of Donald Davidson, who is retiring as the historian of the Indianapolis Motor Speedway at the end of the month.

Donald saying goodbye makes me just as sad as when Jim Nabors sang “(Back Home Again in) Indiana” for the final time.

Whatever you wanted to know about The Greatest Spectacle in Racing, Donald had you covered.  He answered questions about the Indy 500 for over 50 years on WIBC and 107.5 The Fan during his Talk of Gasoline Alley.  Many of the questions were the same – year after year, but that was part of the charm of the show.

When I came to WIBC in 1993, I thought my radio was channeling some weird English show about racing the first time I heard Donald.  He’s English, and he sounds it.  I had no idea who he was talking about when he explained, “Mauri Rose worked at Allison Transmission and practiced for the Indianapolis 500 during his lunch hour.”.  I was from Chicago, and had no idea who Mauri Rose was or that Allison was a major Indy employer.

This was the strangest radio show I had ever heard.  A hour of answers from an English guy to questions about colors and numbers of cars, drivers, starting positions, engines, and broadcasters for the Indy 500.  The answers were very, very complete.  There was rarely time for more than one question each segment because Donald was, well, complete in his responses, and then would recall an anecdote about a driver.  It was unlistenable for me – at first.

By the end of that first May, I loved it.  Donald’s personality was quirky, but warm and authentic.  His unabashed love for the the Indy 500 oozed from the speakers on my drive home.  It was magical, and continued to be through this past May.  I learned about the passion people felt for the Indy 500 that May, as well as a giant helping of arcane trivia.

Over the years, I learned a lot about Donald.  He was a film projectionist in London who was fascinated by the Indy 500 to the point he saved every spare pound in order to make his first trip to America and 16th & Georgetown in 1964.  He returned for good in 1966.  Talk of Gasoline Alley came about a few years later as a segment on WIBC and then a one-hour show that became a very successful tradition.

Donald truly loved – and loves – the Indianapolis 500, but reserves his greatest passion for the roadster era that ended shortly after he arrived.  When I pleaded to Donald that he spend a little more time talking about the current lineup of cars and drivers, he would say, “I’m more interested in the pre-moderns.”  When I asked him to define the “Moderns,” he responded, “Anything after 1964.”

Every spring I would get a call from Donald to confirm that he would host the show again that year.  There was no question we wanted him, so this was a perfunctory communication that could have taken all of thirty-seconds.  Because Donald doesn’t do :30s, the conversation would go on for a long time – with multiple off-ramps discussing topics ranging from radio station formats to jazz singer Mel Torme.  I tolerated the calls at first, and then enjoyed them.  Over the years, I began to look forward to hearing from Donald as an annual tradition in my life.

Among Donald’s greatest talents was filling time during the four annual Indy 500 qualifications shows.  Resolving rain delays at the IMS takes a very long time, and rain happens often during May in Indiana.  From the moment it starts raining, it can be a solid three hours before the track is completely dry.  There was so much commercial content attached to qualifications coverage that sending it back to the studio was financially unsound.  That meant finding someone who could yammer in an interesting way to race fans for looooong expanses of time at a moment’s notice.  Never has a radio host’s talent been so perfectly aligned with a task.

I can’t imagine the Indianapolis Motor Speedway without Donald Davidson, a place with a long list of quirky traditions.  Only at Indy could a projectionist from London become a radio star who specializes in answering questions like, “How many times has the car starting 18th finished as the runner-up?”

Donald was nice enough to sit down with me for some interviews a few years ago where he answered questions about himself as well as those fearless men and women who give deep meaning to the Indianapolis Motor Speedway: