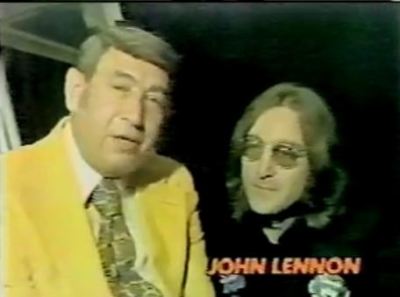 “Remember, this is just a football game, no matter who wins or loses. An unspeakable tragedy, confirmed to us by ABC News in New York City: John Lennon, outside of his apartment building on the West Side of New York City, the most famous perhaps of all of the Beatles, shot twice in the back, rushed to Roosevelt Hospital, dead on arrival.” Howard Cosell near the end of a Monday Night Football broadcast of a Patriots and Dolphins game, December 8, 1980.

That is how the world found out together about Lennon’s murder.

It’s hard to explain how media has changed since 1980.  Back then, cable was just beginning its proliferation.  ESPN was launched 15 months prior, and CNN signed on nine months after that.  Almost everyone watching TV during prime time chose among shows on ABC, CBS, and NBC.  And on Monday nights in the fall, America watched football.

At Indiana University, where I was a freshman living on the third floor in Briscoe’s north tower,  two unmistakable affinities presented themselves every Monday night during my first semester on campus – pot and football.  The latter you heard from TVs in each room, and smoke from the former billowed from under closed doors.

I was in the loft my roommate built for me a couple of weeks prior so he had more room to get stoned with his girlfriend and high school buddy.  I had my parents’ 12-inch black and white TV up there, and I watched the game because studying was tedious and jumping out the third story window would only cause me pain and injury instead of end my misery.

Lennon had recently made a resurgence in our cultural consciousness, releasing his first album of original material in six years.  Songs written and performed by Lennon and his wife Yoko Ono alternated throughout.  This caused issues no longer relevant in the post-album age of music consumption.  If you wanted to listen to Lennon’s loving odes, you either had to tolerate Ono’s shrill and bizarre songs to get to the next Lennon cut or get up and move the needle to the next track.

When Cosell announced Lennon’s death, it was hard to comprehend.  There was always a sense that The Beatles might reunite.  That was gone.  There was also a sense that Lennon was an important voice, whose songs forced us to contemplate decency, hope, and love rather than greed, power, and anger.  He was now silent.  Imagine, Beautiful Boy, Grow Old with Me, and All You Need Is Love would have to be enough.

It seemed like a good idea to get a more informed perspective on this loss, and right down the hall lived the hippie president of the student body – a mentor of sorts for me – named Jeff Stanton.

Stanton had a dry erase board on his dorm room door that he filled will all manner of wisdom.  Reviews of cultural events, sad ruminations on societal woes, and hilarious critiques of   haughty bureaucrats were his best works.  He was a rabble rouser whose oddly effective political cabal insured his election as they stole all copies of IU’s student newspaper the morning the editorial board endorsed his opponent.

As I walked to Jeff’s room to see what he might have written about Lennon’s demise, a cacophony of Beatles songs from each room melded together to form one oddly moving tribute.  Turning toward the cross hall with the single rooms where Jeff lived, I saw him sitting alone just outside his open door.  Strawberry Fields Forever played loudly, cutting through all the other songs in the hall.  His head was between his bent knees.

I got to within a few feet, and just stood there.  Jeff looked up with tears rolling down his cheeks.  I wish I could tell you that I sat next to him and we both wept, or that I put my arm around him and offered profound words of consolation.  His eyes were fixed on mine like I might just be the guy to make some sense of all this.  I shrugged and shook my head before turning to walk back through the gauntlet of disjointed hit songs that continue to define a generation.

I was not the guy to offer answers or empathy to those who felt profound loss because of the death of the smart Beatle.

Shrinking from that moment with Jeff, I climbed back onto my loft of unhappiness and listened to my roommate and his friend chortle about Lennon’s murder and the outpouring of grief from their classmates as they reenacted the scene outside Lennon’s apartment building as they guessed it might have happened, “BANG! BANG! Ugh, I’m shot! Yoko!”

People who claim excessive pot smoking robs people of creativity must have spent considerable time with those two idiots.  I doubt they were very creative two begin with, kind of like Beavis & Butthead minus wit, but the pot, hash, and speed sure didn’t help.

The next night, Indiana’s soon-to-be national championship basketball team lost to Notre Dame, and the world reverted back to normal on a campus more invested in basketball and Bob Knight than mourning a lost icon.

Today, I can’t tell you a thing about that basketball game, but I can still see Jeff weeping, smell the pot smoke, and hear Cosell share the news of a senseless silencing of a beautiful voice and heart.  Hard to believe it was 40 years ago today.