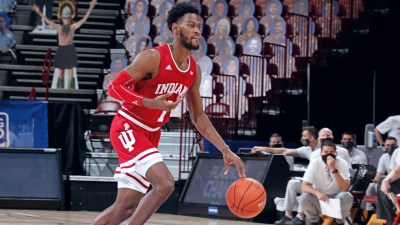 Al Durham made some ill-advised drives to the rim, but his unselfish effort was always there. Hard to get mad at that.

Indiana lost 69-67 in overtime to Florida State last night, so why did I enjoy watching the game so much?

Losses nest with me forever – my personal defeats and those of teams and people I back – so this is a bit of a weird sensation.  I did a Periscope immediately after the game, and I smiled throughout.  I praised the Hoosiers for their loss.  Maybe social distancing has turned me soft.

It occurred to me to wait until I had some sleep to write about the game because I assumed my good feelings for last night’s losers would pass.  Then I could unleash the hounds about Archie Miller being in his fourth year without making marked improvement in results or culture.  My positive vibe remained – and is still here.  I’m still very happy about the Hoosiers effort, and bullish on their prospects to be the surprise team of the Big 10.

The result wasn’t there, but it seems the culture is.

There is a possibility that I am so pleased with the eighth-ranked IU football team that I have become conditioned to smile whenever I see 18-22 years olds wearing cream and crimson representing Indiana University.

Regardless of my possible psychological metamorphosis, I’m even looking forward to Sunday’s game against North Alabama, and I hate win-stuffer games prior to Big 10 play.

Here is another possibility for why I’m pleased with the Hoosiers – because these guys plays hard and together, and that is all that can be asked.  Basketball is like jazz in that all five guys in a quintet needs to play attention to the other four just as keenly as they focus on themselves.  This is the first Indiana team since 2013 to do that.  After years of watching Hoosiers treat Simon-Skjodt Assembly Hall like a holding cell they were forced to endure before being released to the NBA, finally we have a team that appears to be unified in their desire to succeed as an Indiana unit.

Gone are the silly lone wolf antics of the east coast kooks who were lured to Bloomington as a bastion of future pro development without being able to point to Indiana on a map.  They have been replaced by young men who understand basketball is a game played by five together – not five individuals all trying to showcase individual gifts.

Even Trayce Jackson Davis, who put together a George McGinnis esque 25 points and 17 rebounds stat line was anything but selfish.

Even if the result is an overtime road loss against a ranked team, I like it.

Sure, the 14 turnovers were maddening.  Against a well-coached team like Florida State, you need to be strong and smart with the ball.  Three-point shooting continues to be a problem so entrenched that it’s shocking when a shot from deep goes in.  Players feel it too.  Indiana guards pass up open threes regularly.  Guards trying to get to the rim while three Seminoles were already surrounding it was futile, but I never interpreted that as selfish.

Defensively, Indiana works hard and together, and that gives me reason to hope for better results as this season gets serious in January, February, and (fingers crossed) March.

I’m so happy about how Indiana competes that I’m willing to overlook the result it produced last night.  Although I don’t expect my new found sanity to stick around forever without some scoreboard validation, it’s nice to feel this way about a Hoosier team.

It’s been a long time.

One thought on “Indiana Basketball lost last night – why do I feel so good about the Hoosiers today?”