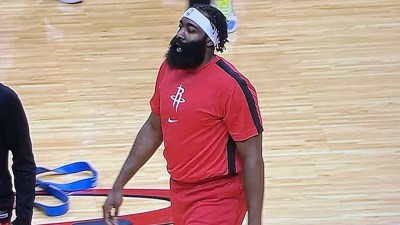 James Harden, who wasn’t a great fit for his uniform Tuesday night, sure wouldn’t fit Indianapolis if reports of demands in Houston are true.

If reports of his pathological need to be pampered are true, Houston Rockets guard James Harden doesn’t need to apply for a position with the Indiana Pacers – and neither should anyone else with similar requirements.

Tim McMahon’s post on ESPN.com detailed a variety of troubling capitulations the Rockets have made over his eight years with the team – including getting coaches fired, requiring trades, delaying flights on road trips, and setting the practice schedule.  That kind of crap does not work in Indianapolis.

Here, people work for a living, understand who the boss is, and would be thrilled to earn one-percent of the cash the Rockets provide Harden.  And they don’t much care for those who don’t.

Harden is the best offensive basketball player I have ever seen, but he has yet to win an NBA Championship.  He is the tail that wags the dog in Houston without providing the return on investment necessary to demand and receive outrageous accommodations from the Rockets.

Harden’s behavior is the price some NBA teams are willing to pay as they embrace the star system of marketing the NBA has employed since the days of Magic, Bird, and Michael.  The difference between that plater-centric system and today’s bizarro world in the NBA is that Magic, Bird, and Michael all devoted themselves to winning championships as they were exploited by the league to build its popularity.  Harden and others like him devote themselves to personal rewards and freedoms at the expense of collective success.

It’s not like the Pacers are on Harden’s short list of teams to which he would welcome a trade, but regardless of his preternatural abilities to score and deliver the ball, the fit between Harden and Indy would be uncomfortable for both.

That needs to be understood by the Pacers – and I believe it is – whether assessing Harden or another player who values self over team as a potential member of this team and community.  That’s just not the way Indy works.  Paul George figured that out, and Victor Oladipo is in the middle of a decision as to whether he wants to be a teammate or star.

One of the very cool things that should attract famous athletes to the Pacers or Colts is the way people here allow them to go about their business without disruption.  I have waited in line at a Taco Bell with Antonio Davis and his wife, stood next to Reggie Miller outside The Original Pancake House in Fishers for a significant chunk of time, sat in a booth adjacent to Peyton Manning at McAllister’s deli, and waited in a long line along with Adam Vinatieri to pay for gas at a Speedway.  None were bothered.

That’s a slight exaggeration.  At the McAllister’s (near Manning and three other Colts), I ate lunch with Fox 59’s sports director Chris Hagan.  Between gulps of his giant sweet tea, Hagan recognized Manning, hopped up, and asked, “Do you know where the first McAllister’s was?”  Manning answered that it was in Oxford, Mississippi.  Hagan congratulated Manning and returned to our booth.

So to be ultra-accurate, the only person I have seen accosted by the public in Indy was Manning, and it was by Hagan.

The star system just doesn’t work well here.  For those who crave VIP treatment, Indy is a bad choice.  If there is a VIP room in an Indy club, it’s unnecessary and empty.  For those who want to dig deep for their team and city, live in relative quiet, and enjoy the fruits of fame without dealing with the pestering rabble that accompanies it, Indy can become a loving home.

The Pacers may not be high or even on Harden’s list, but that works for Indy as a player with his requirements would never be high on this town’s list.