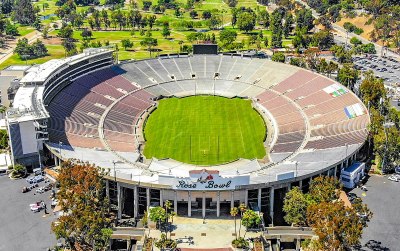 Notre Dame’s Brian Kelly wants to know how playing a CFP semifinal in an empty concrete encircled park makes any sense when many other options exist.

How about today’s fastball up and in from Notre Dame coach Brian Kelly toward the State of California and the Rose Bowl!

The Rose Bowl is the scheduled site for one of the two College Football Playoff semifinals that will likely include Kelly’s Fighting Irish, Clemson, Ohio State, and Alabama.  As it stands today, California officials have shut down all fan attendance at sporting events.

So if the Rose Bowl is the site for a Notre Dame game, Kelly is not enthusiastic that families of players will be prohibited from watching sons, grandsons, brothers, and nephews play what could be their final game.

“I’m not sure we’ll play in the playoffs if the parents can’t be there,” Kelly threatened.  “What’s the sense of playing a game in an area of the country where nobody can be part of it?”

Kelly makes a great point.  Why play a game in an empty stadium in California when there are states and cities where fans are allowed to safely distance in cavernous venues.  Lucas Oil Stadium in Indianapolis has welcomed 12,500 fans for Colts games for the last several months, and will allow 10,000 for Sunday’s Colts vs. Texans game.

Who benefits from choosing an empty Rose Bowl in virus-torn Pasadena, California?  Kelly had a pithy and accurate answer, “We’re worshiping the ashes of tradition. That can be the only reason.”

It stands to reason that Kelly’s comments were a warning shot across the bow of the College Football Playoff Selection Committee, who can choose to send the Irish – assuming they are among the four programs chosen – to the Sugar Bowl at the Superdome in New Orleans.  Recent restrictions have capped attendance for Saints games at 3,000, but that would allow families to attend.

Clemson’s Dabo Swinney agrees, “It makes no sense to me to put a bunch of kids on a plane and fly them all the way to California to play in an empty stadium.  That makes zero sense when you have plenty of stadiums where you can have fans and, most importantly, you can have families. It should be the same for all four teams as far as the opportunity that you have. This a year everybody has had to make adjustments. To me, that would be a simple one to make.”

You can bet Ohio State coach Ryan Day and Alabama’s Nick Saban will feel the same way.  At a time when coaches happily jump upon their high horse to make all manner of nutty comments, here is a moment when they can scream in unison and make perfect sense while the world outside California applauds.