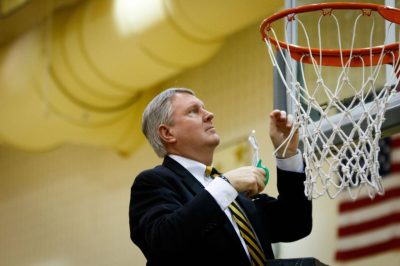 Jimmie Howell is no longer coaching basketball at Lapel High School, and that makes the game a little bit less special.

Every time a high school coach retires or simply quits, I wince.

I assume the cause has something to do with nattering parents, whose love of their children is matched only by their ignorance of the sport their kids play.  Coaches being forced to deal with this well-intentioned rabble is the chief cost of trying to help kids learn the two invaluable lessons that come from competing – how to overcome adversity and the joy of bonding to achieve a collective goal.  Both are crucial toward living as a productive adult, and sports are a great lever toward that result.

Parents, sadly, are unaware that adversity should be embraced rather than avoided.  Many pull strings, yelp, and cause a ruckus when their sons and daughters are exposed to it.  Coaches try to avoid the inevitable meetings about playing time by telling parents they are willing to discuss anything BUT playing time.

When I read that Lapel basketball coach Jimmie Howell chose to retire four games into the current season after 40 years of teaching his players life lessons through competing at Indiana’s game, my head fell into my hands and I muttered, “Not again.”

Then I read his quotes in the Anderson Herald-Bulletin about the Indiana Basketball Hall of Fame member leaving, and there was no doubt the cause of his decision.  “Friday morning, some things occurred that, I just knew it was time.  I told my wife, ‘Tonight’s going to be my last ballgame.’ It just felt — it was time. It kind of happened the way people told me it would happen…When I was younger, my skin was quite a bit thicker than it is now.  As you get older, not only does our skin get physically thinner on us but emotionally as well. It’s just part of it. It’s part of the pressures you have to deal with on a daily basis.”

Oh boy.  Howell didn’t specifically identify parents as the reason he’s leaving a vocation that he loved through four decades, but what else could it be?  Who other than parents could wear out a coach “on a daily basis?”

As the parent of a former high school and college basketball player, I get it.  Nobody sees a son or daughter as parents do – and should.  Don’t coaches understand that son or daughter is the most important person in the world with a bouquet of gifts ready to be unleashed if the coach would just see the obvious?  That question is rhetorical, but the answer if you need one is “NO!”

The tragedy is that coaches who got into the business because of a love for their game and the lessons it can instill are being driven from it by parents who don’t understand that adversity is the magic bean for developing maturity.  Time on the bench is supposed to motivate a kid to practice harder, not parents to schedule a meeting.

And so another really good and caring coach is driven away, while parents likely try to get Howell’s replacement to see that one of the 10 all-time winningest coaches in Indiana High School Basketball history was a dolt for not seeing their son’s talent.  Yep, it seems the guy who led two teams to state championship was blind to the unique greatness of each and every individual on his current team.

Instead of reading a book in the stands like parents used to, they now work behind the scenes to litigate opportunities for their progeny.  Understanding that lessons learned are far more important than on-court/field accomplishment is beyond the capabilities of today’s mothers and fathers.  They want to manage their kids through a gentle and joyous adolescence, rather than prepare teen for the harsh realities of adulthood.

There are plenty of good parents out there, but the noisemakers are wrecking the experiences of coaches to the point that they are packing a box and leaving the bench for good.  High school basketball in Lapel was more special with Jimmie Howell in it.  Ironically, what was so good for a bunch of kids has ended because of the people who claim they want only the best for them.

It’s tragic that there are dozens of kids Howell won’t teach because of a few parents, but it’s a blessing for all of those he was able to impact – including his son J.R., who is a chip off the old block as Zionsville High School’s basketball coach.

If you are a sports parent and really want the best for your son or daughter, do your job and let coaches do theirs.  By the way, your job is to love your children.  The coach is there to help them dig a little deeper, try a little harder, and give a little bit more so the team can compete to its potential.