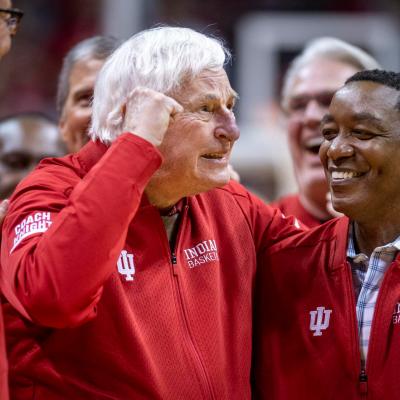 Being compared to Bob Knight might be unfair for Indiana coaches, but it’s part of the reality of coaching in Bloomington.

Indiana lost again Saturday, and I’m not sure what it meant to the Hoosiers.

Winning used to be the reason people competed, and you had to prove that winning was important in order to be recruited to a program like Indiana.  At some point, coaches decided different criteria trumped hunger for winning, so they recruited length, verticality, speed, and other measurables at the expense of attitude and grasp of the game.

Maybe times have changed and parents have grown to care more about stats and offers than winning.  Kids have become meal tickets, and ability for potential earnings trumps banners and trophies.  It’s not that parents and kids are averse to winning – it’s just not the primary measuring stick of a basketball career.

As a counterpoint to this new and highly evolved impersonal brand of sports, I played in a New Albany High School alumni soccer game last month.  I can still run and kick, so I thought it might be fun to compete at soccer again.  Five minutes into the game an opponent passed the ball to a 40-year-old midfielder and I had a clear path to a slide tackle, which is a fundamental part of soccer I used to be good at.  I sprinted toward the guy and began my slide with the intent of knocking the ball out of bounds and having him trip over me as I popped up.

Midway through the slide tackle, I realized that a guy in his 50s slide tackling another guy in his 40s during an exhibition match for charity was the height of competitive idiocy.  I collapsed, skinned my knee, and avoided the midfielder.  That was the first time I have ever pulled up during any sort of competition.  I felt soft.  We won the match 2-1, and I’m still pleased with the result, if not my decision to avoid contact.

That’s the way we used to roll.  Not anymore.  Watching basketball these days can be difficult because winning appears to be a secondary concern to players.  Last night, the Los Angeles Clippers – a team many believe has a legitimate chance to win the NBA Championship – trailed the Dallas Mavericks 77-27 at halftime.  I mean, what the hell is that?

As a guest on 1075 The Fan’s Dan Dakich Show today, legendary Indiana play-by-play voice Don Fischer lamented a lack of “fierceness” with the Hoosiers and other basketball teams, and it’s true.  Regardless of the level, when was the last time you saw a player for Indiana or anywhere else look like he would rather bleed than lose?  Sometimes, there are Purdue players who border on the psychotic.  At Butler, Matt Howard, Ronald Nored, and Zach Hahn were built a little bit differently too.  That’s why they went to two national championship games.

At Indiana, it has always seemed as though players showed up on campus having already won something.  I’m not saying they don’t work hard, but like Sean Connery explains in The Untouchables, winning is about the willingness to do more than your opponent, “He pulls a knife, you pull a gun.  He sends one of yours to the hospital – you send one of his to the morgue!”

This is year four of the Archie Miller era, and I’m still unsure of what his vision for IU’s culture is. It’s clear he prizes defense, but there have been few players under him who have developed into winning players.  Indiana has won a few more games in each of his three seasons, but the offense has not evolved into anything predictably efficient – unless the torrent of missed three-pointers by anyone not named Armaan Franklin counts as predictable.

It’s unfair to blame Miller for the entire 17 years of comparative futility that followed the 2002 Final Four team, but expecting a little progress is not greedy for fans who want nothing more than a little hope for brighter days.  For God’s sake, Tom Crean’s teams won two Big 10 championships!  Tom Crean!

But to ask Miller to answer for whatever this team becomes in year four is entirely reasonable.  So far, the results are lacking.

If Indiana is going to get better, it will be because of the team’s collective will more than its talent.  Will is always measured by the player with the least, and Indiana has a few candidates for that dubious honor.  Franklin and Trey Galloway appear to give a damn enough to know where they are supposed to be and get there.  The backcourt of junior Rob Phinisee and senior Aljami Durham have yet to show winning leadership.

This is a big year for Miller.  At some point, meaningful progress needs to be made or the illusion of progress will be impossible to see to a fanbase that understands what a will to win looks like.

2 thoughts on “Indiana Basketball – Where is the “fierceness” – the toughness, the will to win?”