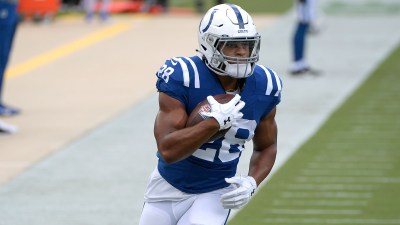 Jonathan Taylor was magic today. Hopefully, he left just a little in the tank for this Saturday in Buffalo!

So the Colts made the playoffs after all on as crazy an afternoon and early evening as we’ve seen in Indianapolis football in many years.

The Colts 28-14 win over the woeful Jaguars was unremarkable in all respects but for the singularly extraordinary running of Jonathan Taylor, who rolled to a franchise record 253 yards on 30 carries.  Taylor’s excellence tied with DeMarco Murray of the Cowboys for the ninth best day of rushing in more than a century of NFL history.

Other than Taylor, the Colts were very similar to the team that either starts games strong and then wilts (like today) or falls behind early only to explode in the second half.  But I have a rule that I recommend the Colts coaches don’t embrace – I never argue with winning.

The Colts should dissect the wherefores and whys of a game like today in search of the reason they tend to get routinely gashed after building a big lead.  My recommendation is they start with why two safeties were stationed 15 yards off the ball after forcing the Jags into a 3rd and 8 midway through the third quarter.  It invited an underneath throw just beyond the sticks.  the resulting first down put the Jags in position to score their second touchdown and close the gap to a manageable six points.

The drama wasn’t over when the Colts walked off the field in celebration after today’s win.  The Colts were guaranteed a playoff berth with their win because the Dolphins were mauled in Buffalo, but there was still hope for an AFC South championship.  The giant screens at Lucas Oil Stadium flipped to show the end of the Titans vs. Texans game.  If the Titans lost, the Colts would win the division and qualify as the fourth seed.

The difference between fourth and seventh is significant as the fourth seed will host fifth seed Baltimore while the seventh seed needs to travel to Buffalo.  No one wants to go to Buffalo on the second weekend of January, especially as the reward for an 11-5 season.

A 51-yard field goal by Texans kicker Ka’imi Fairbairn tied the game with 18-seconds left in regulation, and Colts fans settled in to watch the overtime.  The Titans had different ideas.  Quarterback Ryan Tannehill sickened Colts fans with a 52-yard completion to put the Titans in field goal range with :04 left.  Kicker Sam Sloman hit the right upright with his 37-yard field goal attempt, but the lucky drink dropped over the crossbar and sent Colts fans home as the seven-seed.

Normally the final seed is chum for the best team not to receive a bye, but the Colts are 11-5 and capable of playing with the best teams in the league.  Even better, unnlike previous iterations of the team, this group is built to play in the cold and wet – if necessary.  Taylor was terrific today indoors, but there is nothing about his game that makes you think he can’t run in the cold.  In fact, he broke college records in weather similar to Buffalo’s while a student-athlete at Wisconsin.

The first key to succeeding in the NFL’s postseason tournament is to qualify for it, and the Colts got that done.  Now, the trick will be to get a lead and build on it, instead of giving ground until it evaporates completely – as in Pittsburgh last week, or is all but gone – as they did today.

Unlike the regular season, where teams get 16 swings to build successful habits and exploit them, if they screw this up Saturday, it’s all over.  One errant Philip Rivers pass, idiotic penalty, or soft call from defensive coordinator Matt Eberflus, and another long offseason begins.

Hey, whatever happens, there is reason for optimism for another week, and minus the top seeds in the two conferences – the Packers and Chiefs – that’s the best any team gets.