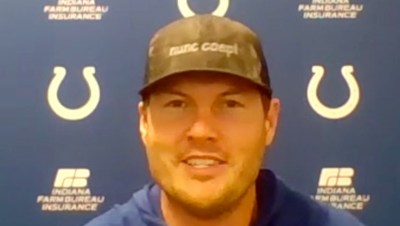 Nobody better to talk to on a Zoom call than Philip Rivers. That doesn’t mean he’s going to go to a Super Bowl for the first time at age 40!

The debate over Philip Rivers as a potential starting quarterback got a little bit weird on my YouTube channel.  On today’s Breakfast with Kent, I said he can’t win a Super Bowl because he cannot run or throw deep, and hasn’t been to a Super Bowl in a 17-year career.

Commenters reply that I must dislike Rivers.  One who identifies as Lois Lane wrote, “He has played great ALL SEASON LONG. He played great in this playoff loss. He wasn’t the one who mismanaged time and time outs. He wasn’t the one who dropped 8 PASSES. He wasn’t the one who let Allen have 2 LONG drives in the game that chewed up clock. I get it, you DONT LIKE Rivers. That’s fine, like who you want, but please don’t give me any of this MANURE about Rivers not being able to get this team to the SB. Did Rivers have a perfect game? No he did not. Did he play very well and GIVE his team a chance to win, YES HE DID(mic drop).”

I try to avoid people who go off the rails with caps for emphasis, as “Lois” did EIGHT TIMES – one for every drop by a Colts receiver she laments.  She writes that I “DON’T LIKE Rivers.”  That couldn’t be farther from the truth.  I like what I know of him.  I also love my son and like several friends very much, but that doesn’t mean any of them should be the starting quarterback for the Colts.

From what I have been able to glean from weekly Zoom calls, Rivers is a GREAT guy who has earned the respect of his teammates.  If I knew him, I would undoubtedly like him.  He seems like a good guy, and I generally like people.  Assessing Rivers as a quarterback who cannot take a team to a Super Bowl is NOT a personal attack.  It’s a professional, dispassionate, and relatively simple act.  Rivers cannot run and his throws lack velocity.  He counters those absent attributes with pinpoint accuracy and decisive delivery to receivers.  That’s good enough to beat bad teams most of the time and good teams some of the time.

Here’s another comment from a guy named Mark Defeo that ascribes Rivers lack of postseason success to bad luck:

“So Rivers plays well enough to beat hottest team in league but your take is he can’t win a SB. First he played for one of the worst organization in NFL for his entire career. And the majority of his playoff loses is exactly what happened Saturday . Missed FG , DB fumbles game winning INT against Brady or they go to SB that year. Having to play on torn ACL while LT and Gates didn’t play. Saturday sums up his career just having bad luck not that he can’t win a SB.”

I have nothing but respect for Rivers stepping up to compete with a torn ACL, but to paint him as a 15-year starting quarterback victim of the Spanos regime and bad luck is silly.  Yes, the Spanos Family have been poor stewards of the Chargers, and there has been some misfortune that caused the Chargers to bow out.  But it doesn’t make Rivers capable of the kind of competitive advantage that Josh Allen, Lamar Jackson, Patrick Mahomes, and Baker Mayfield can create with their mobility and speed.

Yes, Frank Reich screwed up in several key moments Saturday.  So did Kemoko Turay jumping offsides on a 4th & 3 play late in the first half.  Rodrigo Blankenship doinking the right upright from 33-yards did not help.  Neither did Rivers failing to move the Colts into field goal range in the last 2 1/2 minutes.

This is not a referendum on Rivers’ hall of fame candidacy, his value to society, or his likability.  It’s about superior physical gifts that provide a serious advantage to opponents.

If Rivers ran for governor of Indiana or mayor of Indianapolis, I would probably vote for him.  As a quarterback for a football team with the goal of winning a Super Bowl – I pass (lower case).