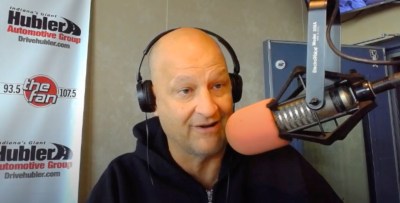 Dań Dakich spoke about “his program” today. He gave 18 years to IU Basketball, so he has earned that right.

Dan Dakich has earned the right to speak his mind about Indiana Basketball, and he did just that during the open of his show on 1075 the Fan in Indianapolis today.

There are people who have called it “scorched earth” on social media.  I call it truth articulated by one who knows because he has been there and done that for as long as Khristian Lander has been alive.

From 1981-1997 and again during the tumultuous final year of the Kelvin Sampson darkness, Dan worked to contribute to the winning and honorable culture of Indiana Basketball.  When he watches others refuse to reflect and respect what Indiana Basketball means to him, Dan can get raw and honest.

When Indiana is outclassed, outworked, and out-executed at Assembly Hall by Purdue, as they were in last night’s 12-point loss, Dan has earned his place at the pulpit from which to proselytize.

Dan spoke of basketball fundamentals that Purdue exhibited and Indiana seems to ignore, like putting a shoulder to the hip of a screener, keeping hands above elbows ready to catch as you come off a screen, and having your momentum forward during a shot.  He also mentioned the clear lack of pride shown by the Hoosiers, and an unwillingness to do what’s necessary to reverse the malaise that has engulfed IU Hoops through the last 18 years.

Dan spoke eloquently about the sacrifices Steve Alford, Todd Meier, and Daryl Thomas made during the summer of ’86 to turn that failure into Indiana’s fifth and final National Championship in 1987.  He correctly assessed the current Indiana team as being unwilling to pay the price needed to win.  Evidence of that lack of emotional investment are in the results of all four of Miller’s teams.

In his 27-minute long genuine and forthright monologue, Dan read texts of exasperation from former IU players he received last night during the loss that communicated a sense of abandonment by their university and their program.

Archie Miller is never going to be a part of that world.  There isn’t an Indiana fan on the planet that doesn’t understand that Miller is the head coach at IU because former athletic director Fred Glass offered him $24M over seven years with $20.5M guaranteed to take the gig.  This wasn’t about work that Miller would do for free because he loves the IU and Bloomington – nor should it be that for anyone.  But it was a business deal for Miller, and he took the job despite having no inkling what Indiana Basketball means to the people here or how to win in Bloomington.

So, Dan and other former players are angry that bad basketball is being played by a bunch of kids who seem to be committed to piss away an opportunity to engage in a collective effort to accomplish something meaningful.  The alums know these four years go by way too quickly, and never come around again.

I’m sure they players ask, “Who are these old heads trying to tell how it is?”  I get it.  I used to listen to alums talk about life, and think about how different today was from 30 years ago.  I’ll tell you what isn’t different from back in Dan’s day – how to come off a screen, get your hands up ready to receive the ball, and the fundamentals of shooting – three of the many areas where the Hoosiers are sorely lacking.

One thing has changed completely though – Purdue is a lock to kick Indiana’s ass twice a year.  That has nothing to do with the psychology of today’s elite athlete.  It has to do with Purdue’s culture of toughness and fundamental execution.

See, like Dan asked today, “What does Indiana Basketball stand for?”  Any fool could see what Purdue stands for basketball played the right way as part of a culture of toughness developed over 40 years by Gene Keady and Matt Painter.  Indiana seems to stand for comfort.

So instead of laughing at the old heads, maybe IU players should embrace playing at a higher level and holding each other accountable for that.  And maybe Indiana University should once listen to a group of men who understand first hand the sacrifices necessary to win at their alma mater, and who might succeed at bringing him to Bloomington.