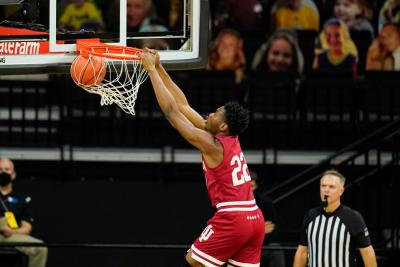 Jordan Geronimo had a nice dunk at Iowa last night, but it was his tenacity and fundamental contributions that stood out in his 10 minutes.

That was a hell of an 81-69 win for Indiana as they beat #4 Iowa in Iowa City last night.  The Hoosiers played the last 12 minutes like it meant everything, and they may have been right.

Given IU’s mounting loss total, getting to the NCAA Tournament for the first time since 2016 was going to take a signature win.  Holding college basketball’s most efficient offense without a field goal from the 12-minute mark to the one-minute mark of the second half gives the Hoosiers a top of the resume’ achievement that will grab the selection committee’s attention.

In the long history of Indiana Basketball, the Hoosiers had never before beaten a top-five opponent on the road while unranked.  Granted, Indiana used to be ranked for entire seasons at a time, and was often in the top five  but it’s still a notable accomplishment.

It’s going to take more than a brief stretch of brilliance – which coincided with Jordan Bohannon’s snow blindness from beyond the arc – to seal the deal and land IU in the event it must qualify for to calm fan bloodlust for coach Archie Miller.

With that in mind, here are seven thoughts about the Indiana Basketball program to keep in mind as the Hoosiers hit the home stretch this Sunday in Bloomington against Rutgers and then launch into a wild stretch against three talented opponents (Michigan, Illinois, and Iowa):

8 – Jordan Bohannon had a terrible night.  While IU fans are delirious about the win at Iowa (and should be), the 0-8 three-point shooting of Bohannon was a critical element in Iowa failing to finish with a win.  During the previous five games, Bohannon made 22-of-35 from beyond the arc.  No one is ever going to hit at a 63% clip over a long stretch of games, so Bohannon was due for a recession to the mean.  It came at the right time for IU.

7 – Indiana’s foul shooting needed to improve – and suddenly it did!  The Hoosiers started the game 13-of-27 from the line before hitting their final eight.  While those eight makes only lifted IU’s overall FT percentage to 60%, they came at the right time as the Hoosiers put this game out of reach.  If anything, IU’s 12-point win is more impressive because they left 14 points unscored from the line.  However, over the next couple of weeks, it would be great if they gave themselves a better chance to win by hitting at least 75% against Michigan, Illinois, and Iowa.

6 – IU’s defense improved when Trayce Jackson-Davis sat with four fouls.  When Geronimo replaced Jackson-Davis with 8:10 left, IU trailed 55-53.  When he returned six minutes later, the Hoosiers had built a 67-56 lead.  That’s a 14-1 run during crunch time without the guy who is supposed to be your best player.  There is no doubt Archie Miller allowed Jackson-Davis to continue to rest because IU’s team defense took several steps up while he sat.  Jackson-Davis should take that personally.

5 – Freshmen are blossoming.  I like this class.  Sure, it might have been a good idea for Khristian Lander to spend what should have been his senior year of high school at Evansville Reitz instead of Bloomington, but Trey Galloway, Jordan Geronimo, and Anthony Leal have been better than expected.  Geronimo was excellent last night as Miller was forced to match him up with Luka Garza after Trayce Jackson-Davis and Race Thompson got into serious foul trouble.  Geronimo’s contributions on both ends over his 10 minutes of playing time were critical during the time the Hoosiers pulled away.  Leal hit a game tying three, and made a beautiful cut to the rim on an offensive rebound to give IU a 16-15 lead.  Galloway has been a steadying force for IU all season long.  This might finally be the nucleus for better than the usual marginal improvement

4 – Luka Garza is a beast.  While Bohannon struggled and Frederick got hurt, Garza just kept balling.  His Hawkeyes didn’t win, but given the double and triple teams he routinely faced, 28 points and 12 rebounds spoke to his skill and toughness.  No offense to Trayce Jackson-Davis, but if Garza isn’t the Big 10 player of the year, there is something amiss.

3 – IU’s coaches look silly in matching costumes.  I’m not a fan of coaches getting all coordinated with bench attire.  It looks ridiculous.  Maybe it’s because I remember a time when Bob Knight was so unconcerned with appearance he had an assistant coach cut his hair before nationally televised games.  Seeing all those IU assistants wearing white quarter zips last night made me wonder how much time is devoted to the decision of what ensemble they will wear from game to game.  By the way, if IU’s coaches don’t wear white again for Sunday’s Rutgers game, they are idiots.

2 – Shooting in rhythm brings success.  Throughout Miller’s four-years in Bloomington, shooters showed too much conscience.  Every attempt seemed to come after serious consideration.  Consideration spawned doubt, and doubtful shooters almost always miss.  Last night, Rob Phinisee and his teammates seemed to get comfortable turning it loose.  The result was eight made threes in 17 shots.  If Indiana can cash at that 47% clip, they can beat anyone in the Big 10.

1 – Beating Iowa is meaningless without a home win against Rutgers.  The Scarlett Knights have lost five straight, including last night’s debacle against Big 10 doormat Penn State.  While free throw shooting has been a weakness for IU, it has been even worse for Rutgers.  They are next to last among all Division One teams, hitting just 57% of their foul shots – eight percentage points worse than Indiana.  EIGHT!  The three opponents that follow Rutgers are tough, so a win Sunday gives IU a critical chance to continue to avoid a debilitating loss.