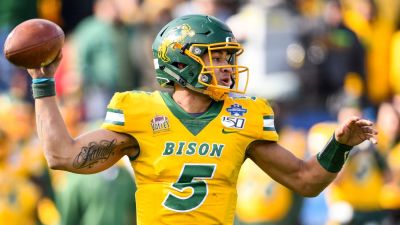 NDSU’s Trey Lance is the key to all the Colts long term dreams coming true.

The question of whether the Colts should choose a quarterback to build around for 10-15 years or someone with whom they can win now is not necessary.  They need to think bigger, and I’m sure Ballard is.

The Colts can ride the long-term and short-term tracks simultaneously.  The Packers have done that since the 1990s, and the Colts should take a page from their playbook.

So how can they accomplish both in the next 90 days?

There is virtually no way the Colts could move up from the 21st overall draft pick to the top five. That eliminates Trevor Lawrence, Justin Fields, and Zach Wilson as possibilities for a new potentially elite level quarterback, but there are two others projected to be taken in the top 15.  One is Mac Jones and Trey Lance is the other.

Jones excelled at Alabama, playing behind an NFL offensive line and throwing or handing off to a variety of soon-to-be first rounders like Heisman Trophy winner DeVonta Smith, Jaylen Waddle, and Najee Harris.  Jones is a game manager like Philip Rivers – a guy who can read a defense and deliver the ball accurately, but without the dynamic athleticism so in demand in 2021.

Lance is a wild card.  He won a national championship at North Dakota State in 2019 with a big accurate arm and fast feet.  NFL Network’s Daniel Jeremiah believes his tool box slides somewhere in between Andrew Luck and Dad Prescott.  The knock on Lance is that he played only one season with NDSU, minus a lone game in 2020 due to COVID.  He has all the gifts, but is likely not ready to make the jump from the prairie to success in the big time in 2021.

Maybe Lance is THAT guy in this draft.  He could rocket up the draft board as Josh Allen of Wyoming did before being taken #7 by the Buffalo Bills.  In that case, Lance bounces to Detroit or Carolina at #7 or #8.  But if he slides, the Colts could find themselves in a position to move up and grab him.

If the Colts can’t get Lance, there is nothing to regret in seeing Jones’ very high floor as a solution.  The ceiling isn’t as high as Lance, but Super Bowls have been won by quarterback less than fleet afoot.  There is a guy who will play in his 10th this Sunday who I could beat in a foot race.

Because the Colts are clearing $46M in cap room as Rivers, Jacoby Brissett, and (finally) Andrew Luck come off the books, they can easily accommodate an inflated contract for a year or two to get something more certain out of their quarterback.

Carson Wentz is not as bad as his 2020 statistics showed.  Leading the NFL in both sacks and interceptions do more to depress his trade market than reveal his abilities.  Wentz had a season in 2017 under Frank Reich as offensive coordinator that the Colts would welcome.  He led the NFL in QBR and the Eagles for most of their world championship season.

Sure, his contract wildly overpays for the contributions he made in 2020, but if $35M buys Wentz at his best and a year for Lance to develop, the only downside is that owner Jim Irsay might tremble while signing his game checks.  His dead money would be $24.6M over the last three years of his deal, but if he plays well the Colts can deal him so they don’t have to swallow that contract for a back-up.

This is February 2, and a lot of things can happen in the quarterback market between now and the draft.  Free agency will start as a feeding frenzy – as always – and with a dozen or more teams looking to upgrade a quarterback, fools will overspend for limited return.

It’s a good bet the Colts will lurk in the weeds, and pounce when the time is right.  That’s what their tendency has been under Ballard, who needs to check the box marked “win now QB” this offseason and eventually “QB Colts can build around.”  It would be heavy lifting the check both during the same offseason, but my money is on Ballard getting that done.

Only thing for sure is the Colts do not have their long or short-term franchise quarterback on the current roster.