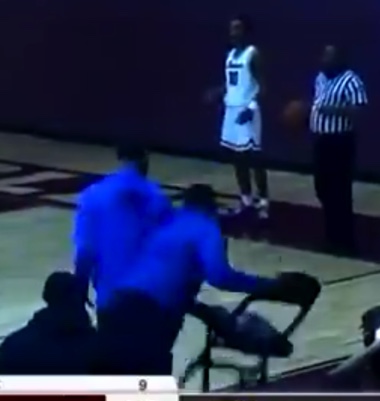 High school basketball coaches need to be educators in word and deed.  When they fail to behave in a way that demonstrates an understanding of that critical role in the development of young men and women, they should be immediately replaced.

That happened yesterday at Lighthouse Academy in Gary, where basketball coach Nick Moore was fired for throwing a chair and a basketball onto the court as he protested what he felt was ongoing unjust officiating.

That ugliness was preceded by Lighthouse’s athletic director Lawrence Sandlin being ejected for an angry outburst directed at officials.  There is no word on how the school plans to handle his loss of self-control.

Students at Lighthouse and every school deserve leaders who understand how to deal with adversity without resorting to angry tirades and furniture rearrangement.  These men fell far short from serving as shining examples for their students, and so Moore no longer enjoys that position of leadership.

Winning is the immediate goal for players and coaches, but the lifelong developmental good basketball provides young men and women is far more important than a loss, even if it is caused by less than righteous officiating – maybe especially so.

Basketball is all about balance – balance between individual talent and collective execution, athleticism and intellect, and intensity and calm.  High school students learn that through the relentless instruction and consistent examples set by coaches, and those lessons serve students well throughout their adulthood.

There is momentary beauty in a jump shot slicing through the net, a perfectly executed pick and roll, a sturdy blockout, and a thunderous or graceful dunk.  But the glory of basketball is in the development of those who learned how to live a balanced life through wisdom inspired during their years playing the game.

Coach Moore lost himself in an angry moment, responded poorly, and is now bearing the pain of a reasonable consequence.  That’s a powerful lesson for his team too.