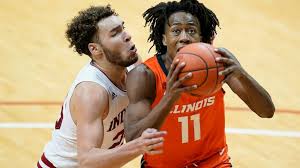 Race Thompson might have played his most complete game as a Hoosier last night, but it wasn’t enough as IU fell in OT.

Indiana lost 75-71 to Illinois in overtime last night for a variety of reasons – lack of toughness, a role player wandering so far from behavioral expectations he was not allowed to dress, Illinois straightening out effort issues for the second half, and the Hoosiers regular dose of inattention to detail.

This is nothing new.  IU has wandered through this self-imposed mediocrity for years – all the way back to the latter portions of the grim Tom Crean era, which is beginning to look like the program’s salad days.  They play well for a game or two, recede to the mean in a loss or two, and then challenge themselves to play well enough to win again.  This cycle appears to be on a never-ending loop.

The Hoosiers played well during the first half of last night’s loss in large part because Illinois did not.  The Fighting Illini showed little fight as Indiana took a seven-point lead into the break.  As resolutely ordinary as Indiana can be, they are capable of moving the ball, creating open shots, and knocking them down against passive opponents.  Last night, IU turned the ball over four times in the first half and shot 48% as it built a 41-34 lead.

The second half was a different 20 minutes entirely.  The Illini found their fight – forcing 11 turnovers and restricting IU’s offensive opportunities.  Indiana gave similar effort on the defensive end with the exception of a game-changing stretch in the second half that changed the game in their disfavor.

If anything, Indiana’s 30 second half point total was more impressive than their 41 in the first half because it came against Illinois at their smothering best.

A personal 8-0 run by Trent Frazier pulled the Illini out of a six-point hole and into a two-point lead with three minutes to play.  Indiana fought back to force OT, and then wilted in the overtime period.

The galling aspect of this loss, and other similar overtime failures against Florida State and Wisconsin, is in the fundamental lapses that cause a lost offensive possession or provide a second scoring opportunity for the opponent.  There were plenty of those last night.

Among the most egregious:

While we are talking about reasons Indiana lost, let’s not completely overlook the effect referees exerted on the game late.  From the time Race Thompson went to the line with 2:56 remaining in regulation until Illinois fouled Franklin on purpose with four seconds left in OT, IU was outshot at the line 8-0.

The officiating was a train wreck in Bloomington last night, and not necessarily in Indiana’s disfavor.  Fifty-four fouls were called and five players were disqualified.  Referees should be paid for maintaining fairness, but in the Big 10 they are either paid by the whistle, as ESPN analyst Dan Dakich joked (kind of) – or they are paid to call the game strictly by the book.  The result was a game that ran beyond two-and-a-half hours of regulation time, and nearly stretched to three hours with the OT.  Referees forcing IU fans to stick it out through a bonus half-hour to experience the entirely foreseeable misery of this loss was cruel.

So Indiana will trundle back to Assembly Hall on Sunday at noon to see if they can beat Iowa for a second time in 18 days.  I doubt Iowa has forgotten the first game – an embarrassing 12-point home loss.

If the regular season record necessary for an NCAA bid is 14-11, Indiana needs to finish 5-3 in their remaining eight games.  The Hoosiers are a long way from being a team that can be counted on to stack wins at that rate – at least they were last night.