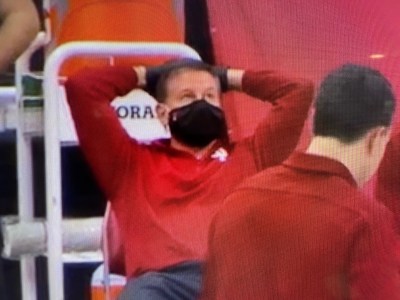 Tim Garl has seen a lot of basketball in his 40 years as Indiana Basketball’s trainer. He seemed to know which way this one was headed as he watched.

What did you think was going to happen?

It’s true that Indiana caused itself a great deal of distress with so many of the same issue that have corrupted its ability to take a meaningful step forward in Archie Miller‘s fourth season, but even if they hit every free throw and cut turnovers to single digits, they likely lose by five or six.

A game after Indiana got off to a weak 21-7 start at Northwestern, they limped to a 21-6 deficit during the first nine-plus minutes of this game.  Unfortunately, Ohio State is just a tad better than Northwestern, and Indiana would make only a cosmetic run at the lead as the game plowed forward toward its inevitably negative conclusion.

With 14:15 remaining, a Trayce Jackson-Davis dunk cut the Ohio State lead to five at 45-40.  The Buckeyes subsequent 22-4 run ended all doubt as to who the victor would be this afternoon.  That stretch was representative of Indiana’s play with four turnovers leading to eight points, three Ohio State Offensive rebounds that lead to six points, and a technical by Jerome Hunter that led to one point.

Self-inflicted wounds for the Hoosiers included:

Toward the end of ESPN’s broadcast, analyst Jay Bilas began hedging his bets as to IU’s potential as an NCAA Tournament team, but who wouldn’t after watching the Hoosiers sleepwalk at 80% effort for the majority of the game.  Several times in the first half, Bilas said, “Indiana IS a tournament team.”  Late in the game, that wild optimism evolved into a safer, “I think Indiana is a tournament team.”

Discussions continue about why Indiana exists in this state of perpetual mediocrity, but today’s result was appropriate given the Buckeyes effort and execution, and IU’s lack thereof.

Indiana remains bubble-ridden with Minnesota and Michigan State visiting Simon Skjodt Assembly Hall.  If they win both, Indiana’s record jumps to a respectable 13-9.  A loss to either would mean the Hoosiers would likely need a victory against Michigan or Purdue to validate Bilas’s confidence.

In the meantime, IU fans hope the switch goes on for a group that appears content to play a game rather than compete in a quest for excellence.