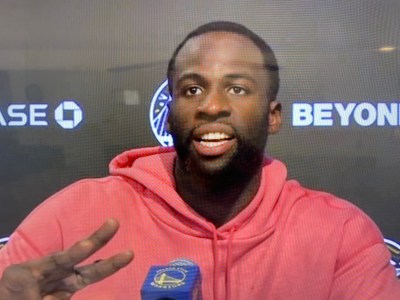 Draymond Green is very passionate – sometimes for good, and sometimes in a way that underscores a lack of understanding of who watches the NBA.

The short story is that Green would like franchises and the NBA held accountable for their behavior and attitude at the same level currently reserved for players.

Here is the long story – in Green’s own very honest words:

“I would like to talk about something that’s really bothering me, And it’s the treatment of players in this league. To watch Andre Drummond, before the game, sit on the sidelines, then go to the back, and to come out in street clothes because a team is going to trade him, it’s bulls—.

“And we’re seeing situations of Harrison Barnes getting pulled off the bench, Or DeMarcus Cousins finding out he’s traded in an interview after the All-Star Game, and we continue to let this happen. But I got fined for stating my opinion on what I thought should happen with another player, but teams can come out and continue to say, ‘Oh, we’re trading guys, we’re not playing you.’ And yet we’re to stay professional.

“At some point, as players, we need to be treated with the same respect, and have the same rights that the team can have. Because as a player, you’re the worst person in the world when you want a different situation. But a team can say they’re trading you. And that man is to stay in shape, he is to stay professional. And if not, his career is on the line. At some point, this league has to protect the players from embarrassment like that.

“We talk all of this stuff about: ‘You can’t do this, you can’t say this publicly, If you say that publicly – Anthony Davis got fined I think $100,000 dollars or something like that for demanding a trade – but you can say Andre Drummond’s getting traded publicly and we’re looking to trade him publicly, and he’s to stay professional and just deal with it?

“And then when Kyrie Irving says, ‘Oh, my mental health is off,’ everybody go crazy about that too. Do you not think that affects someone mentally? As much as we put into this game to be great, to come out here and be in shape, to produce for fans every single night, and most importantly, to help your team win, do you think that doesn’t affect someone mentally?

“As players, we’re told to, ‘Ah, no, you can’t say that, you can’t say this, but teams can? It goes along the same lines of when everyone wants to say, ‘Ah, man, that young guy can’t figure it out.’ But no one wants to say the organization can’t figure it out. At some point, the players must be respected in these situations, and it’s ridiculous, and I’m sick of seeing it. Y’all have a great night. I’ll see y’all tomorrow or Wednesday.”

What Green fails to acknowledge or understand is that the majority of NBA fans live paycheck to paycheck, have no union to protect their interests, and are much more interested in paying their rent or mortgage than being respected by their manager.Whether Andre Drummond is in uniform, a business suit, or wearing pajamas, he is going to make $28,751,775 this year.  He is finishing the final year of a contract that has and will pay him $127,171,313.  If Drummond’s biggest problem is whether he does it in Cleveland, Portland, or Dallas, he’s living one hell of a life.

I understand Green’s frustration.  There is a double-standard in perception, but it is easily explained.  Those who own NBA franchises are employers and players/coaches/staff are employees.  The people who save a dollar here and another dollar there to take a son or daughter to a game deal with the specter of layoffs without warning, hunger, and repossessions.  They hope paychecks continue – accompanied by respect or not.  They sit in corners of the arena Green has to squint to see.

that is true of media too.  With jobs dwindling at newspapers and in TV and radio, Green must recognize fewer and fewer people showing up for games and Zoom calls.  No one in the media is carping about a lack of respect.  They just want to provide food and shelter for kids, and hope to put their kids through college without accrued paralytic levels of debt.

Green, Harden, and Drummond will never have those problems, so they can worry about such trivialities as respect.

It’s phenomenal that Green said what he did because it will be rebutted in a way that might bring wisdom and empathy to a guy sorely in need of both.

And Green is smart enough to get it.