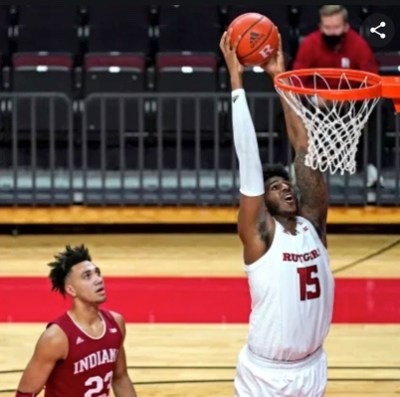 Watching Rutgers dunk last night appeared to be as fun for Indiana players as Rutgers fans.

Indiana was outscored 57-22 during roughly the middle half of last night’s 74-63 loss to Rutgers.  That stretch of putrid basketball may have doomed IU to its fifth straight season without an invitation to the NCAA Tournament.

Facing a test that would either put Indiana inside the bubble for the NCAA Tournament or exclude them from it, Archie Miller chose to play his starters a maximum of 32 minutes.  For contrast, in Butler’s win over Seton Hall last night, LaVall Jordan played four of his starters at least 35 minutes – two played 39.  The Bulldogs are 8-13 as they rebuild, and somehow found the tenacity to play their best group through nearly the entire game.  Indiana managed minutes with a broad rotation of players who get lost defensively and cannot score.

During a crucial stretch in the second half, BTN analyst Stephen Bardo, who is relentlessly positive, wondered aloud, “Who on the floor for the Hoosiers is going to score?”  His comment preached to a choir of Indiana fans tired of watching a stagnant and simplistic offense struggle to put the ball in the bucket.

During Indiana’s opening 23-8 run, Al Durham threw in four three-pointers, and Trayce Jackson-Davis was allowed free access to the rim, resulting in dunks.  When Rutgers adjusted by  pressuring IU’s guards, the Hoosiers had no answer.  Either Miller didn’t understand what was happening well enough to counter, or IU’s players aren’t competent enough to execute his plan.

Either way, Indiana’s collapse was as predictable as it was galling.  There was no way the Hoosiers were going to continue to pour in buckets at a rate necessary to hold off the inevitable Rutgers bounce, but it shouldn’t have devolved so far the Scarlet Knights could outscore IU by 35 over the next 22 minutes!

As Jordan Geronimo made the score cosmetically more appealing with two late three-pointers, chances for IU’s NCAA bid faded to near zero.  With games remaining against #3 Michigan at Assembly Hall, and road trips at resurgent Michigan State and always tough Purdue, it seems a win in any of the three is a long shot.

That final game at Mackey Arena looks especially daunting.  Purdue treats Miller’s IU team like little brothers on the court and in recent recruiting battles.  A loss to the Boilermakers would be a fitting and nauseating end to Miller’s fourth regular season at Indiana.

I can’t help but hope the Hoosiers find a way to defy the obvious expectations of losing against Michigan, Michigan State, and Purdue.  Every time fans and media have thought they had Miller’s Hoosiers figured out, they have found a way to bounce in the other direction.  Impermeable evidence of IU’s lack of predictability lies in its inability to either win or lose more than two consecutive games through this season’s 23 games.

Indiana might have forfeited its opportunity last night to return to March Madness, but it also losing to Rutgers might awaken the pride of some of the Hoosiers who seem lost both physically and emotionally.

The good news is that college basketball seasons are long.  Sadly, that might also be bad news if Miller can’t somehow compel his team to show 40 minutes of fight in any of these three final tests before they limp into Indianapolis for the Big 10 Tournament.