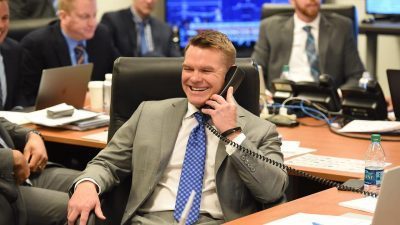 Chris Ballard will be smiling all draft weekend long if the “Kent Sterling Plan” comes to fruition!

The Indianapolis Colts have holes to plug this offseason.  Carson Wentz was wrangled from the Philadelphia Eagles without ponying up a first rounder in 2021, so the Colts still have plenty of assets to utilize as they try to put together the perfect offseason and build a championship roster.

Here are the Colts needs:

Left Tackle – With Anthony Castonzo‘s retirement, left tackle became a must fill position of immediate and dire need for the Indianapolis Colts.  Right behind quarterback, the Colts need to hit a home run with their move to solve the riddle of the left tackle.

Wide receiver – This has been an annoyance since Reggie Wayne‘s retirement after the 2014 season.  The Colts tried to flank T.Y. Hilton with a variety of receivers over the last six seasons.  Phillip Dorsett was a first round flop.  Donte Moncrief came and went after being taken in the third round.  Andre Johnson and Devin Funchess were failed free agent plug and play vets.  Michael Pittman appears to be a keeper after being taken #34 in last year’s draft.  Hilton is now a free agent.

Edge rush – an area that was not nearly what it could have been last year, and really hasn’t been a source of great strength since Robert Mathis played out of his mind in 2013 with an incredible 19 1/2 sacks.  Justin Houston and Denico Autry were adequate with eight and 7 1/12 sacks respectively, but a lack of an explosive rush exposed the cornerbacks.

Cornerback(s) – Almost every NFL team cites cornerback as a need, but after cobbling together a competent if unspectacular unit last year, the Colts may have some heavy lifting to do to fill spots at corner.  Xavier Rhodes and T.J. Carrie are free agents, while Rok Ya-Sin and Kenny Moore return.   Moore was quite good last season.  Ya-Sin on the other hand was atrocious.

Tight end is a position the Colts would like to improve, although they got great productivity and protection out of Jack Doyle, Mo Alie-Cox, and Trey Burton.  Alie-Cox is a restricted free agent, and the Colts would love to have his giant hands back.

How can they address all those needs?  With Carson Wentz in place as a low risk, high ceiling replacement for Philip Rivers at quarterback, the Colts will turn their attention first to left tackle.

The hope was that Castonzo would play one more season.  The Colts then draft an heir apparent, who could provide depth while learning the rope from Castonzo.  That ship sailed when Castonzo walked away from the final year of his contract worth $16 million, but that doesn’t mean the plan should be scuttled.

Unless the Colts take the unusual step to slide generational left guard Quenton Nelson outside, their starting left tackle is not on the current roster – nor is a reliable backup.  If Ballard plays his cards right, the plan as it was developed for Castonzo’s eventual retirement can move forward.

If Nelson moves three feet left and retain his dominance, that would be a perfect solution.  Danny Pinter becomes the left guard, and all is right with the world without the expense of signing a free agent, taking a shot at a guy at #21, or trading to acquire a left tackle as the Colts did last year for defensive tackle DeForest Buckner.  General manager Chris Ballard could then go about the business of plugging other holes – cornerback, receiver, tight end, and edge rusher (not in that order).

But if Nelson can’t be the guy, Ballard can fall back on the original blue print.  He would just need to find a replacement for Castonzo.  There just happens to be one available, and he would likely be an upgrade.

Teams are loathe to allow a quality starting left tackles to leave as free agents, so the question that Ballard needs to first answer when considering spending significant cash and cap space on a free agent is why a team would allow that player to become available.

One free agent who fits in terms of quality and why his current team has not re-signed him is Trent Williams.  The San Francisco 49ers would almost certainly franchise him if they could, but his restructured contract prevents that.  He’s one of the top three LTs in football even heading into his age 33 season, and he’s exactly the kind of leader Ballard covets.  The 49ers have $16.5M under the cap, which is a little less than Williams alone would likely cost.

If the Colts sign Williams to a front loaded deal that allows them to escape in case of injury or age winning that war in which it is undefeated, they check the short-term box and head into 2021 with arguably the NFL’s best offensive line.  Think of this potential signing as being similar to inking Philip Rivers to his one-year deal, with the complication of Williams needing a longer contract.  This is basically the “Anthony Castonzo final year plan” the Colts were hoping to execute.

How about this for a solution for when Williams is gone?  Use the #54 pick to grab Walker Little out of Stanford.  He was projected to be a first round pick before injuring his knee in 2019.  He sat out 2020 due to COVID concerns.  All of that allows for the possibility a 6’7″, 315 lbs. first round talent falls to the late second round.

Because of Ballard’s coy deployment of assets, the two gaping holes they need to address are filled without sacrificing their first round slot at #21.  He’ll hold onto it a moment longer by spending $80 million over four years to sign a true #1 receiver – Allen Robinson.  Coming off two seasons catching a total of 200 passes for almost 2,400 yards from Mitchell Trubisky, Nick Foles, and Chase Daniels, the mind boggles at the thought of what he could do for the Colts if Wentz bounces back to his 2017-2019 form.  Sadly, because of this deal, T.Y’ Hilton will have to ply his wares elsewhere.

Xavier Rhodes is re-signed to solve part of the cornerback dilemma.

I would love to hold onto #21, but the Colts still have a serious need at edge.  If they swap with Jacksonville for #33 and #45, they can pick up Joe Tryon out of Washington and also add slot receiver Tutu Atwell out of Louisville as a replacement for Hilton.

That should leave enough cash to re-sign Alie-Cox and the draft class.  The longterm money for Robinson is a tough nugget to swallow, but we’re trying to win a Super Bowl here, not a prize from the Kelley School of Business for austerity.

One thought on “Colts path to the perfect offseason – needs, solutions, and opportunities!”